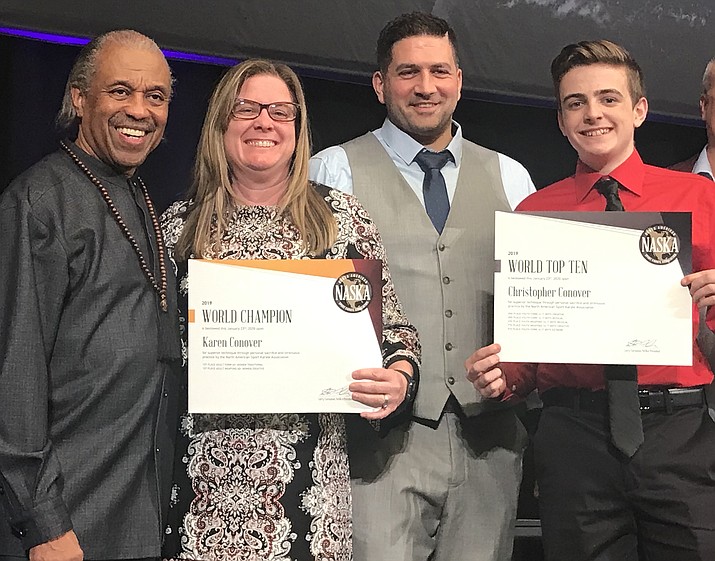 After returning from the North American Sport Karate Association’s end of season Awards ceremony in Chicago last weekend, this mother and son duo came back to small town Cottonwood, Arizona having earned some of the highest achievements in the world for sport karate competition.

Elite sport karate competition seldom has representatives from the state of Arizona, let alone small towns like Cottonwood in the Verde Valley. Karen Conover and her 17-year old son, Christopher Conover, have been competing in martial arts locally for many years. Two years ago, they decided to hit the NASKA World Tour full time just to see what would come of it.

“NASKA is the elite circuit. It’s where all the pros compete. Many of whom have easily transitioned from championship sport to stunt work in Hollywood,” Karen said.

After this year’s 2019 season, Karen, a fourth degree black belt, was crowned a two-time World Champion and Christopher, a third degree black belt, earned World Top Ten Honors in five divisions (two of which he ended up second in the world).

They compete in the forms side of martial arts, which encompasses martial arts movements in a choreographed performance pattern. Christopher specializes in extreme martial arts, which adds a level of creativity and dynamic gymnastics-type tricking to the performance. His accomplishments have resulted in recently being invited to become a member of a highly selective world champion karate team, Team Competitive Edge.

The Competitive Edge coaches and staff include some of the most decorated sport martial artists of all time – Jackson Rudolph, Reid Presley, Cole Presley, Jake Presley, and Mackensi Emory. Team Competitive Edge most notably was crowned the ISKA (International Sport Karate Association) World Championship Demo Team at the US Open, as seen on ESPN.

“I hope to be on that stage helping the team win again in 2020,” Chris said. “I couldn’t be more proud to wear the uniform 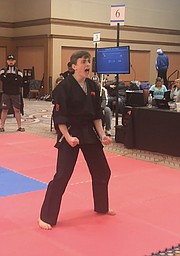 and compete with the best in the world, all of which wouldn’t be possible without great coaches and our team sponsor Asian World of Martial Arts (AWMA),” he went on to say.

The Conovers both teach martial arts at Karen’s school, KC’s Family Tae Kwon Do, in Cottonwood, and have coached many students to State Championship titles over the years. Christopher has even been coaching schools and teaching private lessons to students in Phoenix as well.

With this success on the national and world wide stage, their goal is to begin to help their small-town students at KC’s cross into more elite World Tour events that are held all across North America, mostly on the east coast, and some in Europe. Their local tournament team, Team KC’s, just returned from the AZMARRS State Championships where nine KC’s students won 16 State Champion divisional titles.

“It was an incredible weekend for our organization. By Monday morning, we had a 2X World Champion, a 5X World Top Ten award, and 9 State Champions crowned in 16 divisions. The hard work our students put into their training, win or lose, makes me so proud,” said Karen, whose formal title at the school is Master Conover.

She stressed that her school is more about developing confident and inspired people through the martial arts programs and competition programs, rather than collecting trophies.

“But where inspiration and motivation are found, great things often come of it.”

There are plenty of talented competitors from KC’s who didn’t win the titles, but who are happy for their teammates and motivated to get to work and be their best on the next season. A sign that Master Conover says, “is the heart of a true champion in life.”