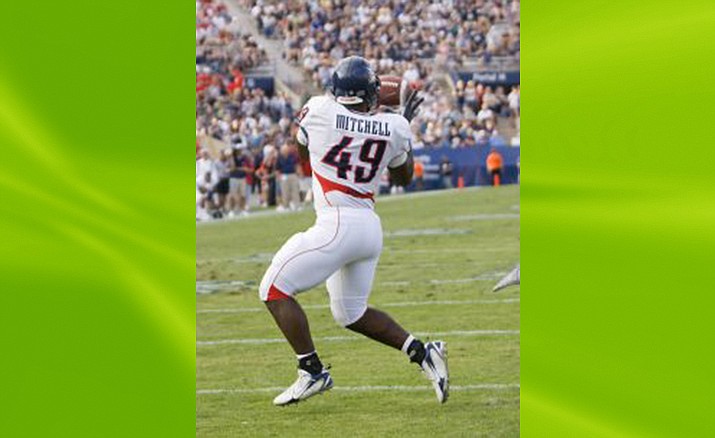 PHOENIX – Earl Mitchell’s long, winding road to the NFL’s ultimate event has featured several starts and stops and what appeared to be an early dead end.

Now, the former University Arizona tight end-turned defensive lineman is preparing to play in a Super Bowl for the San Francisco 49ers.

It’s a long way from where his journey began in Tucson, 12 years ago when he was a forgotten player in the Wildcats’ offense.

Mitchell struggled to find playing time on offense in his first two seasons at the UA. His role was limited, and the arrival of freshman Rob Gronkowski in 2007 made him the odd man out in coach Mike Stoops’ spread offense.

But defensive coordinator Mark Stoops saw potential in Mitchell, the sophomore who owned a wicked trio of size, speed and footwork. It was enough to make him dream.

“We felt like he was very explosive,” Mark Stoops said in a phone interview this week. “He was one of those guys who was very sudden, very explosive, very light on his feet for a big man.”

He couldn’t fathom the prospect of leaving a talent like Mitchell languishing on the bench. So, he started to joke with Mitchell, hinting at the thought of reinventing the 6-foot-3, 215-pound tight end as a defensive lineman.

“(Coaches) were like, ‘We’re thinking of putting you on defense,’ and I was just waiting for them all to laugh,” Mitchell remembered during a recent phone call.

He had totaled 14 catches for 174 yards and two touchdowns in his first two seasons with the Wildcats, and with Gronkowski emerging, Mitchell’s future as a main character in the Arizona offense looked hazy.

But, frankly, he was “one of the best players on the team,” Mark Stoops said, “and he wasn’t being utilized that much.”

“Every day I would come to practice and the coaches would be like, ‘Hey, Earl, what do you think about coming to the dark side?’ ” Mitchell said, laughing. “I remember guys saying that every day to me, thinking nothing of it. But behind closed doors, they all saw big things for me by switching over to defense.”

During spring ball in 2008, Mitchell entered the locker room and saw a blue practice jersey hanging from his locker, signaling the official switch to defense. A blue jersey was for the defense, white for offense.

It started when the Houston Texans selected him in the third round of the 2010 NFL Draft, Mitchell bounced around among three different organizations, including the Texans, Miami Dolphins and the 49ers.

He played in 14 games for San Francisco in 2018, but failed to stick with a team the following year. He had signed a deal with the Seattle Seahawks that summer, but was released by August and announced his retirement in November, not playing a single game in the 2019 regular season.

Mitchell’s career started to become “an afterthought,” he said. He was growing content with the next chapter of his life, beyond football.

Then 49ers General Manager John Lynch rang him in late-December.

Injuries had depleted the 49ers defensive line and Lynch was seeking reinforcements as the playoffs approached. Mitchell said the Seahawks also reached out and expressed interest in him at about the same time.

“I was pretty speechless,” Mitchell said of the offers. “I hadn’t played all season.

“(Lynch) was like, ‘Hey, we’ve had a few guys go down, (I) wanted to see where you were at mentally and physically, and we’ll touch base in a couple days and see where you’re at.’ 10 minutes after we got off the phone, I pretty much knew I wanted to come back.”

Mitchell hopped on board in early January and appeared in both of the 49ers' playoff wins leading to the Super Bowl.

And on Sunday, Mitchell, 32, will suit up for his first career Super Bowl as a member of the San Francisco 49ers, tasked with trying to contain Kansas City’s dynamic quarterback, Patrick Mahomes, and the high-flying Kansas City Chiefs offense.

“I feel blessed,” he said. “I attribute everything to the way I’ve responded to all the changes in my career. I could’ve gotten upset. I could’ve been too afraid to make the switch. I’m just blessed, I’m thankful and grateful for this opportunity.”

As he readies for a Super Bowl clash in Miami, unsure of if he’ll play beyond this Sunday, Mitchell can’t help but reflect on his days as an Arizona Wildcat.

Because it was in Tucson where the idea of an NFL career was born. And now, he’s just thankful.

His transition to the defensive line back then was seamless, according to former Arizona defensive line coach Mike Tuiasosopo. After the move, Mitchell quickly became someone the coaching staff could trust and depend upon.

“He had everything you’re looking for in an interior defensive lineman,” Tuiasosopo said in a phone conversation this week. “He was explosive, strong, he could run. The big thing was to train his eyes, and him understanding how things work on that side of the ball. But he picked it up really quickly.”

Prior to the switch Mitchell had never played defense growing up and had “never even tackled anyone before.” He knew nothing about being a defensive tackle.

But Stoops and Tuiasosopo quickly solved that, he said. They helped him learn the schematics of the defensive line and he studied film of past Arizona defensive tackles in action.

“I think when I made that switch, my knowledge of offense is what helped me most at the time,” Mitchell said. “I played a very physical position, so I think that was helpful for my transition.”

He registered 88 total tackles and eight sacks in 25 games his final two years. He was a proven defensive tackle at the college level, who blossomed right before his coaches’ eyes.

“I knew he was going to be great,” Tuiasosopo said. “He’s one of the best human beings I ever got to coach.”

After one last twist in that winding road, Mitchell can’t help but reflect on the journey.