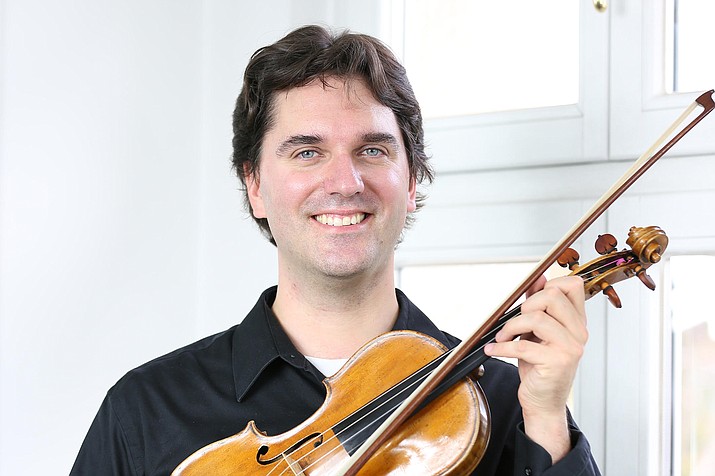 Gregory Maytan has been praised for his ‘infectious vitality’ and for his ‘lyrical freshness’ by The Strad, who also awarded his CD of Scandinavian music the distinction of CD of the Month.

The program, entitled “Northern Lights,” is the second concert of the Sinfonietta’s 15th anniversary season. Maytan brings to town a violin concerto that he has championed around the world – that of 19th c. Swedish composer Amanda Maier.

Maier herself had a distinguished career as a violinist, touring Scandinavia and Russia in the 1870’s. With Maier’s work as the cornerstone, Sinfonietta Music Director Kevin Kozacek has fashioned a program featuring all Scandinavian composers. Works by Edvard Grieg, Jean Sibelius and Edvard Järnefelt will complement the Maier concerto.

Gregory Maytan has been praised for his ‘infectious vitality’ and for his ‘lyrical freshness’ by The Strad, who also awarded his CD of Scandinavian music the distinction of CD of the Month. Also nominated for a Grammis award (Swedish Grammy), Maytan’s CD received the distinction of “Classical CD of the Year” by HiFi Magazine. The Nordsee Zeitung, Strings Magazine and the American Record Guide have also reviewed his performances favorably.

Maytan is a versatile musician, having combined solo, chamber and orchestral playing with university teaching positions. He has performed virtually all the major violin concertos with orchestra and regularly performs in recitals and concerts in Europe and the United States.

He has performed on the Dame Myra Hess series, and at venues such as Ravinia and Tanglewood. He has performed in Australia, New Zealand, Taiwan, Japan and China and was recently appointed concertmaster of the Anhaltische Philharmonie in Dessau, Germany as well as violinist with the Henschel Quartet, which performs internationally.

Maytan performs on an 1800 Joseph Gagliano violin, generously loaned to him by the Jarnaker Foundation, administered by the Swedish Royal Academy of Music.

He has pursued studies at the Stockholm Royal University of Music as well as at Indiana University in the US, where he earned his doctoral degree in violin performance under the tutelage of eminent violinists Miriam Fried and Paul Biss.

As part of his visit to Sedona, Maytan will give outreach presentations to Sedona school children in their classrooms. The presentations are funded by a grant from the Arizona Community Foundation of Sedona.

The Sunday afternoon concert program includes two Humoresques for violin and orchestra by Finnish composer Jean Sibelius, which Maytan will perform in addition to the Maier concerto.

In the Sinfonietta’s program notes written by Edward Ingraham they are described as “light, energetic and whimsical,” in contrast to the major works of Sibelius, known for their dense textures and soaring Romantic melodies. Sibelius was a musical pathfinder whose career spanned both the late 19th and early 20th century.

The Sinfonietta’s performance of Edvard Grieg’s Symphony in C minor, written in 1863 when he was 20, will shine a light on this famous Norwegian composer’s only attempt at a true symphony. It has been seldom performed, largely because the manuscript was hidden away in the Bergen, Norway library until recently, with Grieg’s mystifying and unjustified instruction, “Do not play,” attached to it. The symphony, full of rich melodies confidently developed, dispels Grieg’s reputation as a “miniaturist.”

Earlier in the program the audience will hear the Praeludium by Edvard Armas Järnefelt, a Finnish composer of the late Romantic period who spent most of his career as a prominent conductor in both Finland and Sweden. Although not prolific as a composer, Jarnefelt achieved admiration and renown for his rollicking Praeludium, composed in 1900, and often included on Pops programs worldwide.

The “Northern Lights” program is co-sponsored by Sedona residents John and Ann Steinbrunner and the Sinfonietta Board of Trustees. 15th anniversary season sponsors are Peter and Kathy Wege. Discounted tickets are available before the concert day on the Sinfonietta website, VVSinfonietta.org, for $15, $30, $45, and $60. At-the-door tickets include a $5 surcharge. Tickets for children under 18 are available online for half price.