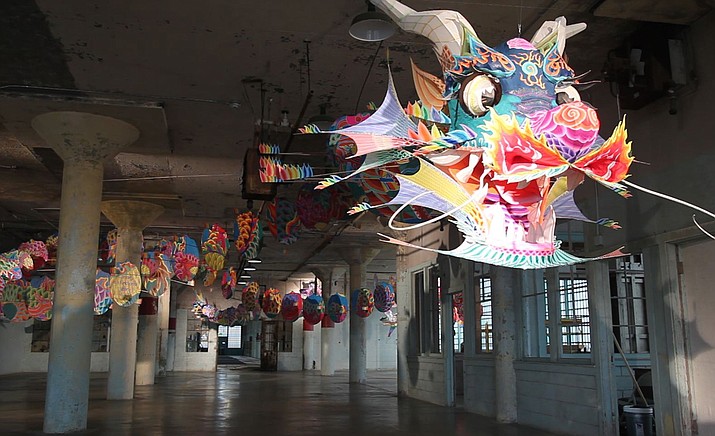 The revolutionary feature documentary “Ai Weiwei: Yours Truly” expands on the unprecedented exhibition “@Large: Ai Weiwei on Alcatraz,”organized in 2014 by the film’s director Cheryl Haines.

Following Ai Weiwei’s detention by Chinese authorities and while still under house arrest in Beijing, the outspoken artist and activist remotely transformed Alcatraz, a former island penitentiary and current national park, into a remarkable expression of socially engaged art.

The multipart work culminated in an expansive display of larger than life size Lego portraits of prisoners of conscience from around the world, seen by over 900,000 visitors.

Throughout the film, viewers discover how personal these issues are for Ai Weiwei and the extent to which he wove his family’s experiences into the exhibition.

In the late 1950s, his father, a nationally revered poet, was imprisoned in a remote work camp. Ai, his mother and brother recall years of privation on the edge of the Gobi Desert – and the profoundly moving impact of an unexpected postcard expressing support.

The final artwork at Alcatraz, “Yours Truly,” consisted of postcards beautifully illustrated with the national birds and flowers of the prisoners’ countries.

Visitors were invited to write messages of hope to the imprisoned activists featured in the Lego portraits. By the time the exhibition ended, over 90,000 postcards had been sent. Then something even more astonishing happened: prisoners and their families began writing back.

“Ai Weiwei: Yours Truly” follows these postcards around the globe — from Alcatraz Island to Beijing, Washington, D.C., and Cairo — as former prisoners of conscience and the families of those still detained describe their impossible choices and the comfort they found and still find in messages from people they would never meet.

By the film’s end, Ai himself is finally free, seeing his own exhibit in public for the first time. He meets with former prisoner Chelsea Manning, while others who have been released, such as Egypt’s Arab Spring activist Ahmed Maher, express wonder at the connections Ai has initiated and the many strangers who sent encouraging messages.

Ultimately, “Ai Weiwei: Yours Truly” is a call to action, extending the incredible reach of Ai Weiwei’s art by asking viewers to take the issue of global human rights to heart and make a simple gesture that would profoundly touch those unjustly imprisoned worlds away.