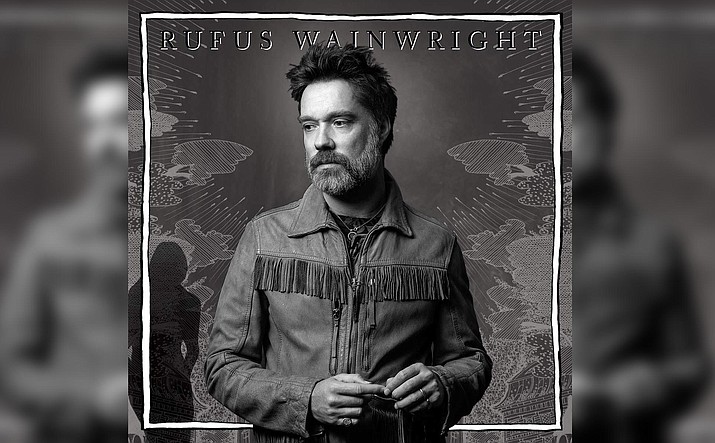 Unfollow the Rules is Rufus Wainwright’s upcoming studio album, scheduled to be released on July 10.

It marks Wainwright’s ninth of original material, his first since Out of the Game (2012), and his first under BMG.

Unfollow the Rules was produced by Mitchell Froom.

In January 2019, Billboard said Wainwright had “put the finishing touches” on the album, which was being mixed. In addition to recording with Froom in Los Angeles, he confirmed the involvement of drummers Matt Chamberlain and Jim Keltner, as well as guitarist Blake Mills.

“Trouble in Paradise,” released in October 2019, served as the album’s lead single. “Damsel in Distress”, “Peaceful Afternoon”, and “Alone Time” were released in February, March, and April 2020, respectively.

Originally scheduled to be available on April 24, the album’s release date was pushed back because of the ongoing coronavirus pandemic.

Tracks include: Trouble In Paradise, Damsel In Distress, Unfollow The Rules, You Ain’t Big, Romantical Man, Peaceful Afternoon, Only the People That Love.

Everything changed for Auckland, New Zealand’s The Beths when they released their debut album, Future Me Hates Me, in 2018. They quit their jobs, said goodbye to their hometown, and devoted themselves entirely to performing across the globe. They found themselves playing to crowds of devoted fans and opening for well-known acts like Death Cab for Cutie. Songwriter/lead vocalist Elizabeth Stokes worked on Jump Rope Gazers, in between these intense periods of touring.

Like their earlier music, the album tackles themes of anxiety and self-doubt with effervescent power pop choruses and rousing backup vocals, zeroing in on the communality and catharsis that can come from sharing stressful situations with some of your best friends.

Their most emotive and heartfelt work to date, Jump Rope Gazers stares down all the hard parts of living in communion with other people, even at a distance, while celebrating the ferocious joy that makes it all worth it.

Tracks: I’m Not Getting Excited, Dying to Believe, Jump Rope Gazers, Acrid, Do You Want Me Now, Out of Sight, Don’t Go Away, Mars the God of War, Just Shy of Sure.

Julianna Barwick – Healing Is A Miracle

‘Healing Is A Miracle’ is her first studio release in five years, and marks her highly anticipated return in collaboration with her new label, Ninja Tune.

Much lauded by the critics, Julianna has been supported and featured by The New Yorker, The New York Times, Pitchfork, NPR, The Fader, The Guardian, CoS, Stereogum and more.

The title of the new record is inspired by the wonder of how the human body heals itself - a miraculous process that we pay little attention to and by which the artist feels enthralled.

Recorded in the wake of a seismic shift in her life following a move from New York to Los Angeles, where Barwick is now based, the release sees her embrace her new locale.

With production from her friend and longtime collaborator Sturgill Simpson, it shows both of them pushing into unexpected directions.

Margo Rae Price is a country singer-songwriter based in Nashville, Tennessee. The Fader has called her “country’s next star.”

Her debut solo album Midwest Farmer’s Daughter was released on Third Man Records in 2016 and recorded at Sun Studio in Memphis, Tennessee, and was engineered by Matt Ross-Spang. The album was recorded in three days.

Tracks include: That’s How Rumors Get Started, Letting Me Down, Twinkle Twinkle, Stone Me, Hey Child, Heartless Mind, What Happened To Our Love, Gone To Stay, Prisoner Of The Highway, I’d Die For You.

Ray Wylie Hubbard is the secret handshake amongst those who know.

Earthy, real, funky, unabashed, his 16 album catalog has been swapped and played on the road for decades.

That passion for the man who’s as much a renegade poet as a roadhouse saint brought together an eclectic mix of guests for Co-Starring, his first ever high-profile label release.

Ringo Starr, Joe Walsh, Pam Tillis, the Black Crowes’ Chris Robinson, and Ronnie Dunn were just a few who clamored to jam with the wizened icon.

His guitar technique uses a strumming by the left (fretting) hand that is very old, but not frequently seen in double time without changing right hand beat.

He describes his 2017 album Tell the Devil I’m Getting There as Fast as I Can as rock & roll, though his style has become associated with outlaw country, which he makes fun of in the song Lucifer and the Fallen Angels singing “Why go to Nashville knowing you never, ever gonna be mainstream? It’s better to reign in hell than serve in heaven.”