No containment on Slate Fire south of Prescott 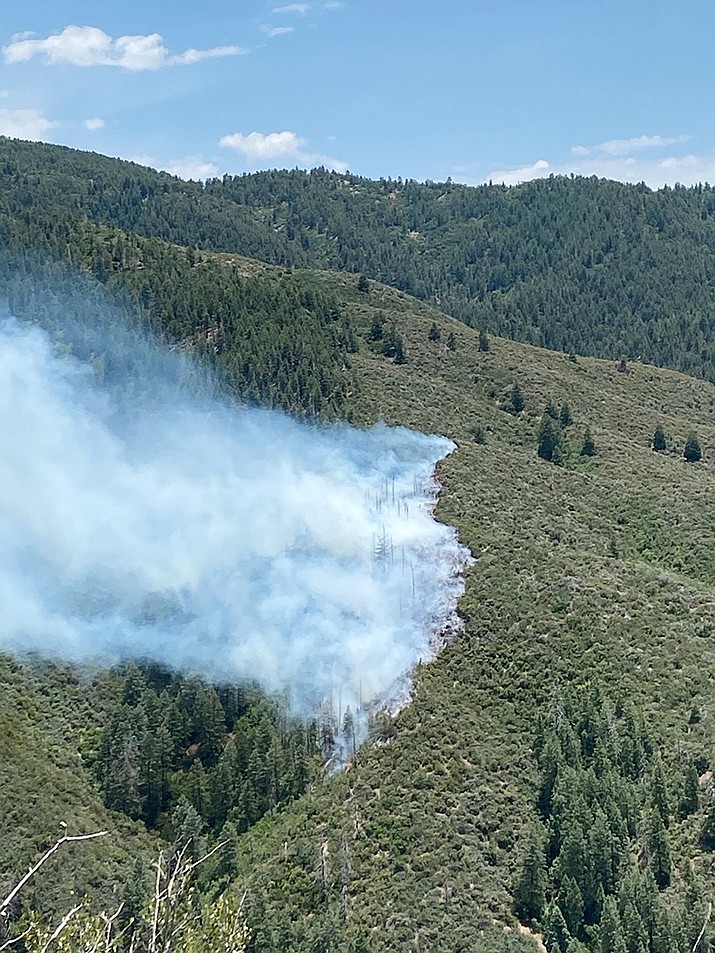 The U.S. Forest Service reports firefighters have zero containment on the Slate Fire, which has burned about 10 acres in an area located off of Bradshaw Road, south of Prescott. Courtesy of Prescott National Forest

PRESCOTT NATIONAL FOREST — As of 11 a.m., Monday, July 13, firefighters have zero containment on the Slate Fire, which has burned about 10 acres in an area located off Bradshaw Road, south of Prescott.

According to a report from the U.S. Forest Service, firefighters responded to a smoke report at 11 a.m. Sunday near Mt. Tritle. Aviation resources were able to keep the growth of the Slate Fire down, which allowed ground resources to make access to the fire just before sunset.

The Forest Service requests people stay out of the areas of Lower Wolf Creek, Senator Highway south of County Road 101 and the community of Potato Patch as firefighters and fire-related traffic will be traveling in the area.

Light winds, becoming southwest around 10 to 15 mph in the afternoon, with gusts up to 25 mph along with the chance of showers, are forecast for Monday afternoon.

The Pine Mountain Fire is only five acres and is a remote area. Smoke from the lightning-caused fire can be seen from I-17; monsoon rains are expected to help contain the blaze.

The largest Arizona wildfire this season, the Bush Fire, is now 100% contained. It charred almost 200,000 acres in an area northeast of Mesa in the Tonto National Forest.

Also burning in the Tonto National Forest is the Polles Fire, according to inciweb.nwcg.gov.

While that blaze has only burned 624 acres and is 75 percent contained in an area west of Payson, a helicopter helping fight the fire crashed last week.

The pilot and lone occupant, Brian Boatman, was killed, and Gov. Doug Ducey ordered flags to be lowered to half-staff in Boatman’s honor.

The Bighorn Fire, which had grown to 119,020 acres northwest of Tucson in the Coronado National Forest, is now 92% contained.

The 71,000-plus acre Magnum Fire, burning along State Route 89A near the North Rim of the Grand Canyon, is 88% contained. The origin of the fire, which stated on June 6, is still under investigation.

The Navarro Fire, burning in an area southwest of Tucson, is only 1,100 acres and is 10% contained.

The Wood Springs 2 Fire, burning in the northeast part of the state, is 96% contained after being held to about 13,000 acres.

There are three fires burning in very rugged, remote parts of the Gila Mountains. None are bigger than 30,000 acres.

Several other fires around the state are either less than 1,000 acres or are 100% contained.

For the latest road closures and other information, check the online map found at inciweb.nwcg.gov.