Rockin’ in the Pandemic World 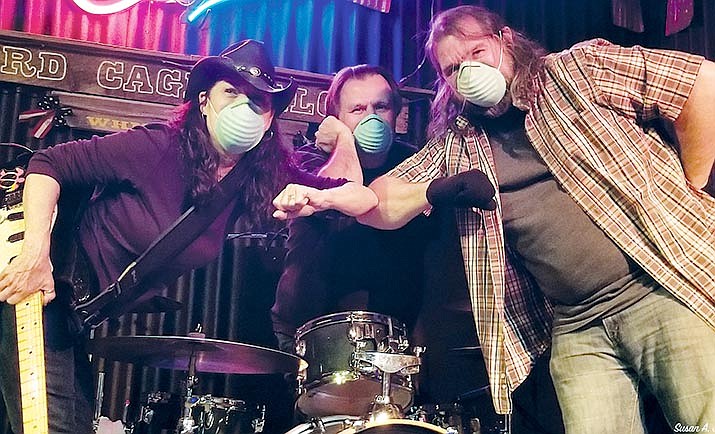 Llory McDonald, left, Darryl Icard and Steve Botterweg bump elbows. McDonald said that many musicians were getting back to their audiences before Gov. Doug Ducey’s June 29 order closed most bars in Arizona.

Jerome’s sparkplug rock-and-roller Llory McDonald, who works weekend crowds into a dancing fever during her lively Spirit Room shows, is spending her time during the pandemic growing tomatoes and doing housecleaning.

“When they first closed it down, it was kind of nice,” McDonald said. “We were playing so much (before the pandemic) that the bass player and I were kind of super-gluing our fingers back together.”

McDonald said Combo members - Darryl Icard on bass, who played with Roger Clyne, and Steve Botterweg on drums, also with Major Lingo - were very busy with gigs before the pandemic.

But when the virus hit, it was the longest break from her audience in her career, McDonald said.

She started playing in bars and nightclubs when she was 16 and 17 years old in the 1970s.

But things were looking up recently. McDonald did get to play six shows during the pandemic before Gov. Doug Ducey shut down bars last Monday.

The shows were outdoors, McDonald said, because they felt safer playing in the outdoor venues or patios. The musician said it’s scary to be in an indoor venue now.

Combo Deluxe is a regular band at the Spirit Room, which has not reopened since the pandemic, and plays Phoenix, Flagstaff and Prescott and other bars around the Verde Valley. McDonald is a full-time musician.

Besides her household chores, McDonald has been catching up on her reading. She also broke out her old recorder and is trying to rework some filed-away songs to “keep those callouses up.”

She tried a couple of the virtual “Covid Concerts” from the Spirit Room, which were streamed live on Facebook, but “without an audience, it’s kind of a strange feeling.”

“When you play live, you get an energy from the crowd,” the rocker said.  “You put out energy and the crowd gives energy back. It’s a cool little circle of love.”

“It’s kind of weird to sing to a camera or phone,” she added.

McDonald lives in Jerome and she has some great neighbors, who have been doing private music shows a couple of times a month in their driveway.

She played with the Jerry Riopelle band since 1984 until his passing two years ago. He was a big rock star to her when she first saw him in the 1970s and was honored to join his band. McDonald put out an album in 1995 titled “Stand Up.”

She said that a lot of musicians were getting back to their audiences before Ducey’s new order closed bars.

“I know a lot of them were going back to play, because we love to play,” she said.

“I feel for all the bars,” she said, adding that she hopes there are places to play when it’s all over.

Decker gets back to the land

Brandon Decker, the Sedona-based mega-talented singer/guitarist, said he has spent more of his time with his son and on the land hiking, camping, swimming during the pandemic.

Decker said he played between 100 and 200 shows a year for the past decade, so not playing any live shows is really different.

“I’ve stayed busy creatively. I’ve written an album based on the times but not sure the soundness of engaging in such a thing with so much uncertainty,” he said. “I’ve been playing a lot of Neil Young.”

Decker, who performs in venues from the Verde Valley to Phoenix to California to New York City, said music venues nationwide are closed indefinitely.

But he was able to have a spirited evening at Oak Creek Brewery this month before the governor shut down bars again June 29.

“I am doubtful there will be any more venue concerts this year, but I guess it’s possible,” he said, adding that he’s done a couple of streaming concerts.

“I think it is important right now, much like the late 60s, that art match the times we face,” Decker pointed out. “This (hopefully) seeming tipping point to ending systemic racism and the reality that we are all in such newfound uncertainty in so many ways as we face this pandemic.”

“It’s no time for fluff, in my opinion. Music is important to most all of us and I continue to listen and create.”

Tommy, can you hear me?

Tommy Anderson, who said he plays more than 100 shows per year in the Verde Valley, said he has played three live shows since the pandemic started.

He played Vino Di Sedona on Friday, June 26, just before Gov. Doug Ducey ordered bars shut down because of the new spike in coronavirus numbers.

He said the audience was great, and Vino Di Sedona last was really on top the social distancing. “It’s crazy, I did the best show of my life.”

“We laughed, we joked. I do their favorite stuff. Everyone’s happy,” Anderson said. “That’s what’s music’s about.”

He said there were about 40 people at the show that usually draws about 100.

“Private COVID parties,” he said, where there is a small number of people and everyone is separated.

Anderson said he tried doing on-line streaming shows the Internet, “but I hated it.”

“You’re in your living room, you got a camera on a tripod, my cat’s looking at me. This is stupid,” he said, laughing.

“It’s a weird feeling,” he said. “It makes you feel more isolated if that’s possible.”

Anderson, who has endless creative energy, is redoing his website, writing and recording songs at his home studio during the pandemic down-time. He also owns Tommy Rocks — a music store in Jerome that celebrated its six-year anniversary last week.

“I didn’t want to write a coronavirus song,” Anderson said. But this pandemic is proof that all people are all brothers and sisters. “No one is immune and we all have to look after each other.”

Anderson calls his song “All Alone Together.”