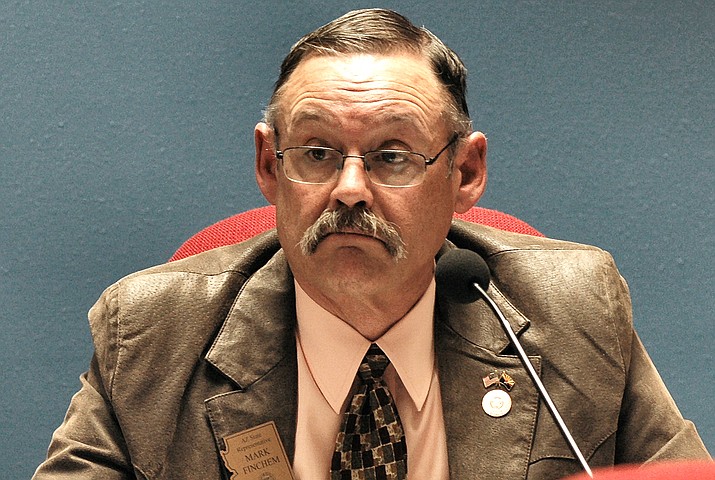 PHOENIX - A Southern Arizona lawmaker is claiming that a new study he commissioned shows that there is no correlation between the rising number of people being infected with COVID-19 and the number who wind up in the hospital.

And Rep. Mark Finchem, R-Oro Valley, is accusing the state health department of withholding the raw numbers that will let he and other lawmakers decide whether the trends being cited by Gov. Doug Ducey to justify his actions are merited.

On Tuesday, Finchem said it is wrong to focus on the rising number of positive test results as a reason to impose restrictions on individual and business activity. He said that fewer than 10 percent of those people who test positive wind up in the hospital.

But former state Health Director Will Humble said the most obvious flaw in the report is that the person who did the analysis -- Finchem's brother, Kirk -- did not recognize that there is a delay in the data. What that means, Humble said, is that the claimed downward trend in hospitalizations just is not occurring.

Rep. Finchem said he's not buying it. In fact, he claims that the data being produced by the health department -- what winds up on its daily public "dashboard'' that's also used by Gov. Doug Ducey to support his actions -- may be skewed.

"The agency is refusing to release the data to me as a legislator so we can attempt to replicate their work,'' he told Capitol Media Services. Instead, Finchem said, what's produced for public consumption is "the preferred narrative from the agency.''

No one from either the governor's office or the state health department would comment.

But Humble dismissed the contention that the real numbers are being hidden.

"I find no reason to believe that,'' he said, saying there are people at the agency now who were there when he was director, prior to 2015, whose judgment he trusts.

And Humble has not been a defender of the governor, saying that Ducey moved too quickly to lift restrictions in May.

It's not just Humble who is noticing the delays in reporting and how that affects the numbers -- and the conclusions that can be drawn. Joe Gerald, an associate professor at the Zuckerman College of Health at the University of Arizona, concluded in a recent report that it can take time to actually record deaths.

And Gerald, in his report, said that as of July 10, 3,485 of Arizona's 7,971 general ward beds were occupied by patients with suspected or confirmed COVID-19 infection, a 16 percent increase from the week before. So there is a trend -- toward increased hospitalizations.

Kirk Finchem concedes there are weaknesses in his report.

He said any relationship between tests and hospitalization is masked by the time lag between the two as well as the average duration of hospitalization, all numbers he said he has been unable to get.

Rep. Finchem has accused Gov. Doug Ducey of continuing to overreact to the virus even after the main danger had passed.

"The original premises of 'flatten the curve' was to smooth out the usage of critical care hospital beds by slowing the transmission of the virus,'' Finchem said.

"The effort was never about preventing the transmission of it,'' he said. "But that seems to be the new objective.''

Finchem said that's why he requested what he called "an independent, objective analysis'' from Anchor-Helm, a firm at which his brother is listed as the sole director of the limited liability company. He said what was produced comes from "a disinterested third party based on what the Arizona Department of Public Health has published.''

And he suggested that perhaps the statistics being used by Ducey to justify his actions -- he recently ordered that bars, gyms and fitness centers once again must close -- might not be the most accurate.

"I also find it interesting that the graphs from the last governor briefing were attributed to the New York Times,'' Finchem said.

Humble said there are reasons that the increasing number of COVID-19 cases is not yet creating a crisis at hospitals. One of them, he said, is that there are fewer elective surgeries being conducted, either because they are being squeezed out by coronavirus patients or that those awaiting elective procedures have chosen to put them off rather than enter a facility.

And then there's the fact that fewer people end up in Arizona hospitals in June and July.

Humble figured that average hospital population is 1,700 below the yearly average in June and 1,100 below in July.

"So we are just darn lucky that this exponential growth in hospitalizations happened during the very two months where we have dropping admissions for all other reasons,'' he said.

"That's not going to be working in our favor when August comes,'' Humble continued. "Because August goes back up to the annual average."