Two Sedona lifeguards exposed to COVID-positive person; pool to close for 2 weeks
Camp Verde has had no such issues; one of two Cottonwood pools open 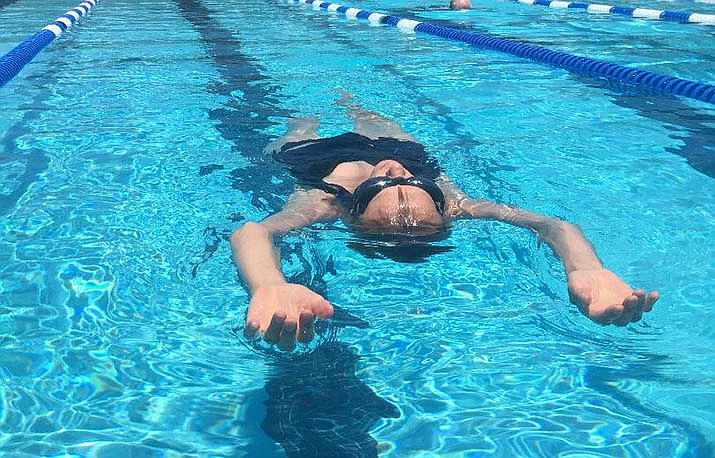 A swimmer floats in the Sedona Community Pool in June. The City of Sedona announced Monday the pool will closed for at least two weeks after two lifeguards were exposed to someone who is positive for COVID-19. VVN/Vyto Starinskas

SEDONA – In a news release issued late Monday afternoon, the City of Sedona announced the closure of its community pool.

Two pool lifeguards have been exposed to someone who has COVID-19.

“In order to ensure the health and safety of city employees and patrons, beginning Tuesday, July 14, the Sedona Community Pool will close until approximately July 28,” the city said in its release.

Following CDC, state and county health guidelines, the two lifeguards are being tested and will quarantine for two weeks. Results are expected within seven to 10 days, the release states.

The City of Sedona, in coordination with Yavapai County Community Health Services, will evaluate opening the pool once the test results of the two lifeguards are received.

The release says the exposure did not occur at the pool. The city says the two lifeguards participated in recent offsite rescue training that is critical to their job, putting them in close contact with each other and increasing the risk that COVID-19 may have spread to other lifeguards and pool staff.

The city said lifeguards have been following CDC guidelines at the pool. These include physical distancing and mask-wearing when not in the water.

Sedona Parks and Recreation Manager Steve Richardson is quoted in the news release addressing precautions and a policy issue.

“Closing the facility while awaiting test results is the only way to ensure COVID-19 is not inadvertently spread at the pool,” Richardson said. “Anyone who has a reservation in the next two weeks will be provided a refund.”

Having already opened the pool June 8 for adult lap swim and aqua fitness classes, Sedona opened up to recreation swimming later in June throughout the week, with classes for small children on Saturdays. A maximum of 50 total guests during rec swims was implemented.

Camp Verde Parks & Recreation Manager Michael Marshall said none of the 14 lifeguards on staff have been tested, but he suspects eventually everyone in the Verde Valley will know someone who’s been exposed to a COVID-positive person, in some way.

“The two questions we continually ask are ‘Do we need to worry?’ and ‘If so, to what extent do we need to worry?’” Marshall said. “The key is to keep having conversations about where we’ve gone, who was there, what do we know about them, and how do we feel, physically.”

Marshall said the Camp Verde pool hasn’t had to substantially change its hours, formats or schedules to adjust for health concerns since it reopened June 13 under CDC guidelines. He said swimming lessons pose more of a distancing challenge than lap or recreational formats.

If there are any doubts or concerns about anyone’s safety going forward, Marshall said, two keys are to take the safest approach and to go with the advice of trained medical personnel.

“We need to have the courage to tell people to stay home until we figure certain things out, and we need to not try to supplant medical professionals,” Marshall said.

Cottonwood City Manager Ron Corbin said his city’s outdoor pool is open for lap swimming, with spacing and occupancy restrictions, and water aerobics, but the indoor pool remains closed. The Cottonwood Recreation Center closed for a second time this year June 29 when Gov. Doug Ducey ordered all gyms to be closed.

“For both pools to be open for open swim, the governor would have to allow for more than 10 people in a group,” Corbin said.