Brush fire shuts down southbound I-17 near Sedona exit 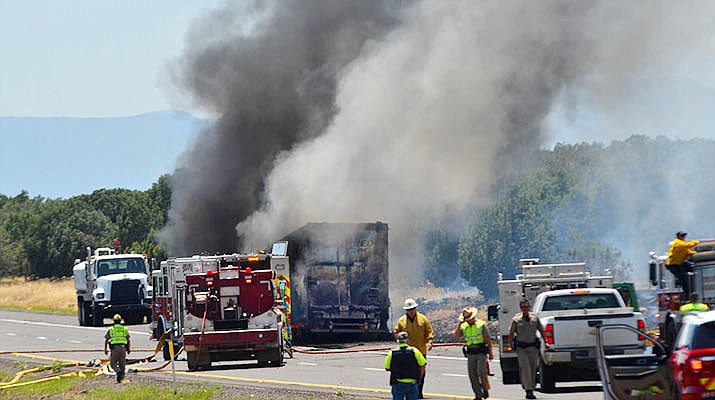 A big-rig truck caught on fire in the southbound lanes of I-17, near exit 306, Stoneman Lake Road, Wednesday afternoon. This caused a brush fire that caused all southbound lanes to be closed for hours. VVN/Vyto Starinskas

Motorists are asked to avoid I-17 southbound late Wednesday afternoon -- especially the stretch from Flagstaff to Sedona and Camp Verde.

A big-rig truck caught on fire in the southbound lanes, near exit 306, Stoneman Lake Road. This caused a brush fire that bled off of the highway.

That's about eight miles north of the main exit for Sedona, which is State Route 179.

Southbound I-17 traffic is being turned around at Fox Ranch Road, exit 317.

No time has been estimated by the ADOT for re-opening I-17.

The northbound lanes are unaffected along that stretch of I-17.

Traffic was also heavy along State Route 89A through Oak Creek Canyon -- the only paved alternative route between Sedona and Flagstaff.

Earlier, a prescribed burn along I-17, by the U.S. Forest Service, between mileposts 273 and 277, had northbound traffic down to one lane near Cordes Junction.

Paving, guardrail work on I-17 from State Route 179 to Camp Verde extended through next week
I-17 work from Camp Verde to SR179 wraps up next week
10 patients assessed after I-17 wrecks
Traffic delays to be expected on I-17
Fire causes weekday delay along I-17
Event Calendar