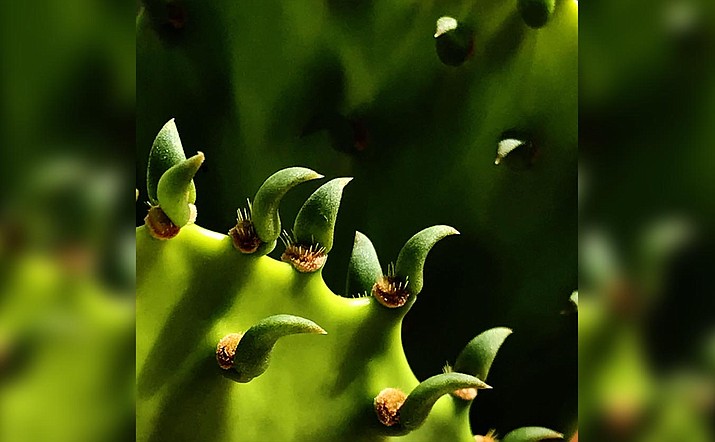 On their first date in January 2011, Teresa and Bill Helm shot photographs at the botanical garden in Santa Barbara, California.

It’s been nearly 10 years and the Helms are still shooting photographs.

The Camp Verde couple’s first wife-and-husband photography exhibit, Earth and Sky, will be on display from Aug. 3-28 at the Cottonwood City Council Chambers, 826 N. Main St. The exhibit can be seen during the town’s regular business hours, as well as from 4 p.m. until 7 p.m. during Cottonwood’s Second Saturday event, Aug. 8.

Earth and Sky is a snapshot of Teresa and Bill’s most recent nature imagery. Teresa has explored her interest in nature photography from a macro and close-up perspective. She works mostly in color, but is not afraid to take on the dark side ... black and white photography.

“I like seeing the detail in objects, especially in living things,” she said.

Teresa has always preferred to work in color. “Everything is in color,” Teresa said. “I’ve not really thought much about things in black and white, because I see it in color. I always have.”

Starting with the magic of a Polaroid camera, Teresa became interested in the photographic process. She was on the yearbook staff in high school and discovered she had a knack for taking a good and interesting photograph.

“I am self-taught and enjoy being creative and learning new techniques in the art of photography,” she said.

Anything from macro and close-ups of florals to sweeping landscapes can be interesting subject material. Much of Teresa’s work is inspired by abstraction and impressionism, and she also enjoys shooting portraits of pets, especially of the family cat, Cody.

A photographer since the late-1980s, Bill took his first photography class in community college. “I processed and dried my first roll of film, looked at what I had shot, and found it was rubbish,” Bill said. “But I knew that I had found my voice. Photography. Just had to keep learning and figure out how to say what I was feeling.”

Bill is inspired not only by historic photographic processes, but also by early- to mid-20th century black and white cinema. He combines fine art with documentary realism. Although a digital photographer the past 15 years, Bill works almost always in black and white.

Much of Bill’s subject matter has been people. From portraiture to fine art to figure work to conceptual to journalism, he enjoys photographing people more than anything. Bill has explored the landscape, especially clouds and the Verde River, since he and Teresa moved to the Verde in March 2013. But his work is still black and white, as well as sepia.

Teresa and Bill Helm are also members of the Verde Valley Photographic Society. When not restricted by COVID-19 safety measures, VVPS members meet the fourth Thursday of the month in the Camp Verde Community Library.

The Verde Valley Photographic Society can be found on Facebook.