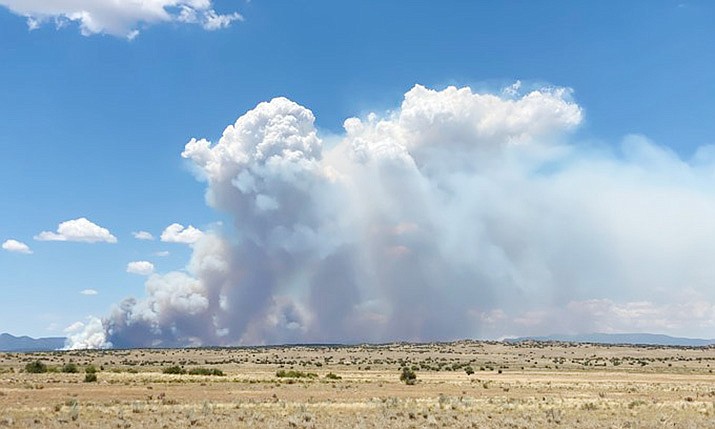 Perscribed burns, such as this one in the Graver area, are still taking place in Arizona, but significant rain this week helped wildland firefighters tremendously. Courtesy of U.S. Forest Service

PRESCOTT NATIONAL FOREST – The wildfire that’s been having the most direct impact on the Verde Valley over the past week still has no containment -- but significant rain Thursday helped the situation on Pine Mountain.

The lightning-caused blaze is located in a remote part of the Pine Mountain Wilderness, southeast of Camp Verde, in the Verde Ranger District. It has moved to the north and east from its initial location, making it onto the Verde Rim.

On the western flank, the fire remains active within Bishop and Sycamore Creeks.

Unmanned aircraft unit and one manned aircraft are all that are being used to help douse parts of the Pine Fire, but fire managers are engaging the fire with a monitor strategy.

Smoke can be visible as thunderstorms move in over the area and outflow winds will increase smoke production. Smoke impacts are possible over I-17, East Verde River, Camp Verde, Dugas and Pine/Strawberry.

A 20 percent of thunderstorms were forecast for Friday afternoon.

All trails leading into the Pine Mountain Wilderness have been closed for public safety, and ordered closures can be expected in the future. Fire managers and forest personnel can go in and evaluate the fire area to mitigate any hazard trees along the wilderness trail systems for public safety.

The U.S. Forest Service requests no one fly drones in this part of the forest.

The next-closest fire to the Verde Valley is the Thumb Fire. Located on the Great Thumb Mesa, on the Grand Canyon’s South Rim, about 20 miles northwest of Grand Canyon Village, the fire had engulfed about 8,300 acres by Friday afternoon.

According to the website inciweb.nwcg.gov, major rainfall Thursday and early Friday made it possible for firefighters to leave the area, as there was 88 percent containment.

The lightning-caused fire began on July 16.

The largest Arizona wildfire this season, the Bush Fire, is now 100% contained. It charred almost 200,000 acres in an area northeast of Mesa in the Tonto National Forest. There are several other fires burning in the state that are more 90% or 100% contained.

The Bighorn Fire, which had grown to 120,020 acres northwest of Tucson in the Coronado National Forest, is now 100% contained.

Not far from the Thumb Fire — in terms of nautical miles — is the 71,000-plus acre Magnum Fire, burning along U.S. Route 89A near the North Rim of the Grand Canyon. It’s s 88% contained.

The origin of the Mangum Fire, which stated on June 6, is still under investigation.

There are two fires burning in the Gila Mountains that have less than 70% containment, but neither blaze has reached 30,000 acres.