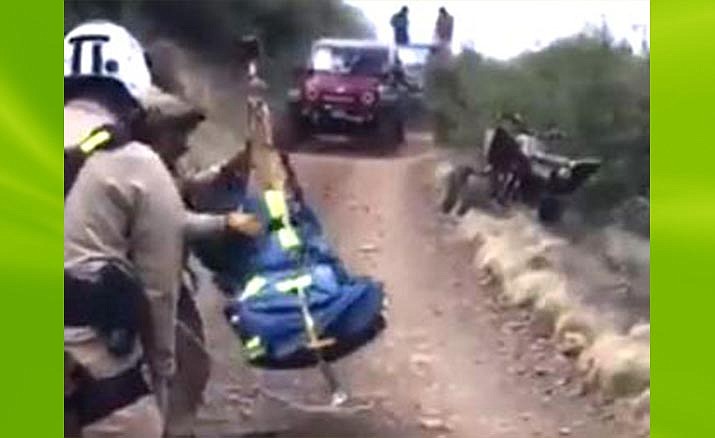 Jerome firefighters and police officers initially responded, with assistance requested from Cottonwood Fire and DPS Ranger helicopters. Due to road conditions, only a single rescuer in a 4-wheel-drive truck was able to access the area. Jerome Fire Dept. courtesy photo

JEROME – It took the work of first-responders from multiple agencies to get a man and woman from an ATV accident down from a remote part of Mingus Mountain Sunday.

At about 1:15 p.m., a dispatcher notified the Jerome Fire Department of a serious injury ATV accident along Forest Road 413, which is, according to Muma, little more than a rugged trail accessible by ATVs and high-clearance 4-wheel-drive vehicles only.

Jerome firefighters and police officers initially responded, with assistance requested from Cottonwood Fire and DPS Ranger helicopters. Due to road conditions, only a single rescuer in a 4-wheel-drive truck was able to access the area. Muma was the initial first-responder to arrive on scene. He found both a man and woman lying in the roadway with several bystanders — who had been in Jeeps coming from the opposite end of the trail — attempting to assist the two injured people.

The ages of the victims was not mentioned.

The male victim initially advised he was stable and the single EMT focused on the female victim. While she displayed serious injuries, her vital signs were stable, and focus was shifted to the man.

It was discovered that he had possible spinal injuries with neurological deficits and poor vitals, making him the priority, Muma said.

About 20 minutes into the rescue, DPS Ranger One helicopter arrived on scene, but was then delayed due to the elevation and temperature conditions at the scene, which required them to offload some weight in order to continue.

Additional responding ground units had to delay and wait for a responding Jerome Fire ATV to access the scene. One responding rescue unit lost a tire due to road conditions.

Additional Jerome fire and police personnel arrived on scene about 10 minutes later and treatment continued with DPS Ranger returning and dropping two medics at the location.

Treatment continued, and due to the remote location and unavailability of a landing zone, both patients would require helicopter-winch extraction. The male priority patient was taken by Ranger One to Cottonwood where an awaiting transport Guardian Air helicopter then took him to a hospital, Muma wrote.

Meanwhile, treatment and packaging continued on the female patient, while personnel waited for Ranger One to refuel for the remaining operations.

Ranger One returned to the scene, and the female patient was secured for the lift and winched up to the hovering helicopter for transport.

Helmets were worn by both victims and were essential in reducing the injuries, possibly saving their lives, Muma said.

Muma also thanked the citizens who stopped and helped the victims before first-responders could get to the area.