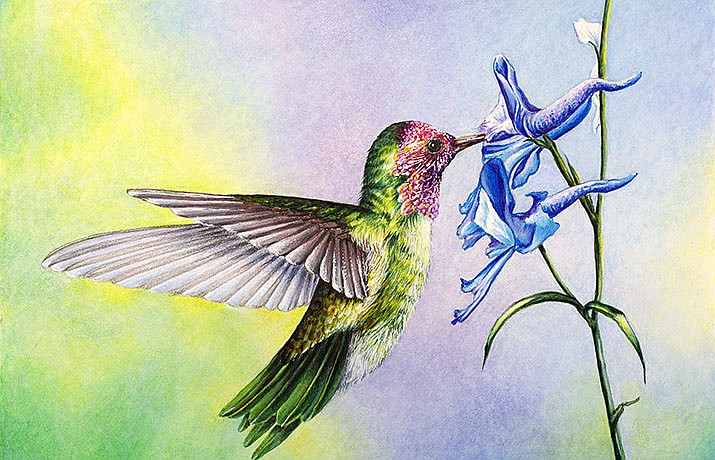 Mountain Trails Gallery at Tlaquepaque in Sedona will present a new exhibition called Birds of a Feather & Friends. It will open with a reception on Friday, Aug. 7, 5-7 p.m.

The gallery is also proud to introduce Arizona artist Barbara Rudolph and her delightful realist aviary paintings. All these artists have a unique way of expressing their experiences in the bird world and are looking forward to sharing their vision with those who appreciate what these winged creatures have to say.

Working from the north shore of New Zealand, Adele Earnshaw and fellow painter Joe Garcia have both created new paintings influenced by their surroundings and the local conditions of a new world order.

Adele’s new series includes a flock of crows in a sunset landscape, as she acknowledges a playful reference to the scientific nomenclature of the “corvidae” which she writes, “is a cosmopolitan family of oscine passerine birds from the crow family, or more technically “corvids,” that contains the crows, ravens, jays, magpies and more.

Joe Garcia and his artist wife Anne were visiting Adele when the pandemic limited international travel, so, instead of being at Mountain Trails Gallery for their annual exhibition, they are both still in New Zealand, and “roughing it” as Joe quips.

Sculptor Raymond Gibby continues to work from his Utah studio and has created his new “Light in the Darkness” bronze of a wise owl who represents optimism and being able to see a way out of darkness and uncertainty in any life situation.

In addition his new raven is descriptively called “The Art of Communication.” Colorado artist Bryce Pettit also finds great lessons in wildlife. His complex winged hawk “Storm Front” stands firm even though the winds of change blow really hard, and his “Raven” on a fence post is ruffled as he speaks volumes for all to hear. Both artists’ work is grounded in biological realism but the addition of life-like individual character encourages a smile.

Aviary artist Barbara Rudolph brings her own relationship to painting birds often placing them in unexpected places and including objects of nostalgia or keepsakes that add to the charm and visual interest of her oils.

Remembering her bird carver father encouraging his young daughter to paint birds, Barbara pays tribute to him in so many of her realist paintings. Layer upon layer is laid down as she often takes realism to heights that make the viewer second-guess if the bird is actually alive.

In addition, Barbara takes a more contemporary approach in several of her painting, such as her “Flight of Feathers” which includes a hummingbird surrounded by drifting feathers and a gold leaf design element, as well as in her eye deceiving oil “Coming In For A Landing” of a black-capped chickadee seemingly hovering above an actual painter’s pallet with dollops of color squeezed around the perimeter.

Many of this artist’s paintings include colorful birds like the cardinal and the bluebird, but also included in her repertoire are common species made uncommon with gold or silver leaf or as the focal point of a painting. Barbara Rudolph is represented in numerous collections, shows and exhibitions, and has been a long standing member of the International Guild of Realism.

More dynamic work by wildlife sculptors Sandy Scott and Michael Trcic, as well as intriguing work by colored pencil artist Sandra Byland, wildlife portrait and landscape painter Jennifer O’Cualain, and festive plein air painter Betty Carr who round out the remarkable artists who find inspiration and give a voice to winged creatures large and small.