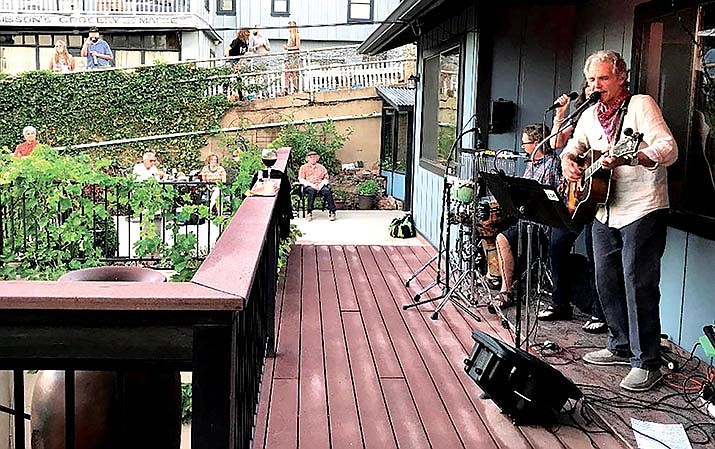 JEROME - You don’t need to have a toga party to hire a band for your party.

And you don’t even have to be rich.

Look at this way: When couples go out to a club, they each spend $50 for cover and drinks.

But you can’t do that now because bars are closed.

But for the same money, you can hire a musician or band and throw a socially-distanced porch party at your home.

Fans of live music, who have not seen bands in four or five months, are thirsty for the magic of an in-person performance. So why not do it at home?

Steve and Sherry Hopkins of Jerome decided to hire a band to play on their porch during the pandemic. It was so successful they have done it five times now.

The couple said they decided to help out local musicians by hosting a band every couple of weeks, and they put a tip jar out for anyone stopping by the performance.

A few spaced-out tables were set up on their lawn last Thursday.  Their house is located on State Route 89 so it was easy for mask-wearing people to be socially distant and still observe the band from the overhanging sidewalk and decks on other homes.

Ziegler, who had been performing shows several times a week before the pandemic, said it’s the first time he’s played in front of an audience in the last few months.

People are overjoyed to finally hear some live music again, said Ziegler, who is the merry minstrel leader of Major Lingo, a local band that inspires enthusiastic audience interactions.

“It makes a big difference in a lot of people’s lives,” he said, “and mine, and Tory’s, and Candace, and Nick’s.”

Ziegler said the homeowner paid them a fee, but the tip jar is where they made more income that night. “We’re all blessed when they’re throwing you a buck,” he said.

“It’s what the audience gives back,” he said referring to playing live and seeing enthusiastic faces. “The love you give is the love you make,” he added. That was the Major Lingo attitude, he continued.

The Major Lingo reunion with Tony Bruno was going to be in Spook Hall this fall, and it would have been a “hug-fest, sweat-fest, breath-in-your-face fest.” But the pandemic put the brakes on that, he said. Maybe St. Patty’s Day, he said, with his Irish accent.

Ziegler said people might be surprised that they could bring a single musician or a band to their porch party for anywhere from $100 to $400.

“They just want to play,” Ziegler said.  “It all slipped away. It was a great jolt. Shows like this one in Jerome are the kind of boost musicians need.”

One of the owners of the porch-party home, Sherry Hopkins, said everybody should consider hiring musicians for their porch parties.

They have done it five times now, she said. The couple lets musicians choose some guests, bring their own drinks, she said. Everything is totally sanitized and everyone is kept separated. People can listen to live music and be out on a date night, Hopkins added. “It’s intensely good.”

The neighbors have been showing up and people are enjoying the music from nearby decks, yards and the street. So the tip jar greatly helps out the fee that the couple is paying the bands.

Hopkins said she and her husband decided they would use some of their stimulus check from the government to give to people who are hurting more than they are.

“There are musicians that aren’t working anymore and not making tips,” Hopkins said. “They can use the money.”

“They were so anxious to play live and be with their friends again,” she said. The tip jars are sometimes four times what they are paying them, she said.

“People are understanding that we need to support musicians,” Hopkins said. “The people get so much from it. I’ve never seen so much gratitude.

Hopkins said Tommy Anderson was the first musician she had at her porch parties.

“I’ve been doing private parties,” Anderson said. The musician plays guitar and sings original music as well as rock cover songs. “Private COVID parties,” he said, where there is a small number of people everyone one is separated.

“And that’s been lucrative,” he said. “Solo, on people’s back lawns.”

“Harrison Begay, a well-known Native American blues-funk guitarist and vocalist from Phoenix, was in Sedona last Saturday playing at a porch party. He said he was hired by some fans who had seen him perform at the nearby Sound Bites Grill.

Begay, also known as Sir Harrison, said he was fortunate to get hired in Sedona Saturday night, and he put the show on Facebook Live where he also gets tips.

Begay said he has not played any other porch parties during the pandemic, but has done Facebook Live shows.

It was great to be on the balcony Saturday night in the cool weather, seeing a handful of people who he hasn’t seen in a long time, people who come to his shows, Begay said.  It was nice to actually have a conversation with them.

Some of them were flight attendants who also are not working that much either, he pointed out.

It would really help support musicians if people hired them for porch parties since they are not working, Begay said. He was doing four or five shows a week from Phoenix to Prescott to Flagstaff before the pandemic.

It’s not that expensive to hire a musician for a couple of hours, as long as it does not get into three or four hours, he said.

“I don’t think it will be as expensive as they think,” Begay said.