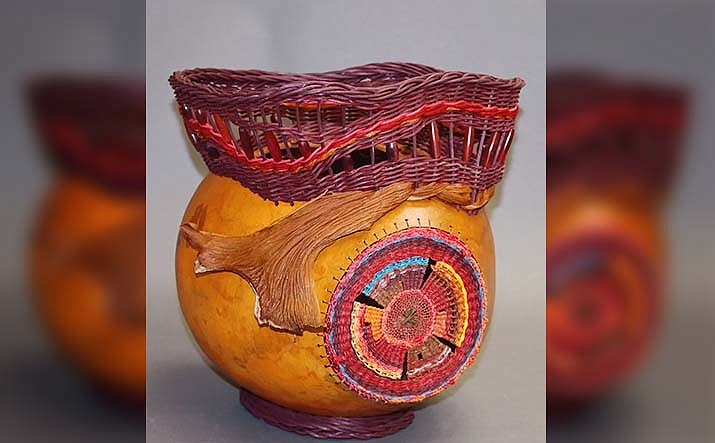 When an artist relocates to Sedona, it is a given that the red rocks and local Native American culture will influence their work.

But when basket weaver and multimedia artist Shirley Eichten Albrecht moved here from St. Louis in 2001, she did not realize just how big of an influence it would be. Not only has her work become more colorful, it has also moved far beyond traditional basketry to incorporate raku pottery that she makes herself, deer antlers, stones and, most prominently, gourds.

Shirley, known locally -- and with much affection -- as “the basket lady,” is the newest member of Rowe Fine Art Gallery’s esteemed family of artists. In August, Shirley will be the gallery’s featured artist, kicking off a monthly series that continues through 2020 with a different artist spotlighted each month.

As a child growing up on a farm in rural Minnesota, Shirley constantly sketched and photographed her surroundings. She earned a degree in art and music from St. Cloud State University, and she wound up teaching in Minnesota and then in Texas, where she also developed a freelance art business. (Teaching is clearly in her DNA; before the COVID-19 pandemic struck, Shirley taught weaving classes from her home studio twice a month. “It’s fun to see people grab onto this art form and learn,” she says.)

Shortly after Shirley moved to St. Louis in 1987, she became intrigued with weaving baskets. What started as a hobby quickly became a passion. During the day, Shirley worked in marketing at a company she and her husband owned, but at night, she could be found in her studio, creating intricate designs. She co-founded a basket-weaving guild in St. Louis and eventually co-founded one in Sedona. Craft enthusiasts scooped up Shirley’s designs at local art shows and gift shops. Shirley laughingly remembers the first time she brought in a more sculptural basket to the basket supply shop where she taught basket-weaving classes and purchased materials.

“‘What’s that?’ they said,” recalls Shirley. “I told them it was sculpture, and they wanted to know what people were supposed to do with it. Everyone was used to seeing egg baskets and market baskets but not something sculptural.”

That all changed when Shirley and her husband, photographer, and digital painter Robert Albrecht, moved to Sedona after catching a case of Red Rock Fever. These days, Shirley specializes in figurative pieces that incorporate basketry, needle weaving, gourds, beads and semiprecious stones.

The gourd figurative pieces tend to be Native American in design and take on their own life during the creative process.

“Gourds just speak to me,” says Shirley. “The sculptures are very organic – I don’t plan out each design. It is intuitive and meditative. Sometimes a gourd will sit in my studio for a year before I decide what I’m going to do with it.”

Shirley has earned numerous local, regional and national awards, including multiple first-place honors and Best of Show at Sedona Arts Center; a Best Woven award at WovenWorks 2008 from Fitton Center for Creative Arts in Ohio; honorable mention at Prescott Fine Arts Association’s Celebrating Prescott Territory 2007; and a Juror’s Choice Award at the 2005 It’s Elemental Annual Fine Craft Exhibition at Coconino Center for the Arts in Flagstaff.

She has also been juried into prestigious shows such as the 2018 FACE of Fiber in the Rockies event in Colorado, and the 2011/12 Woven in Time show at the Missouri History Museum in St. Louis. Her work has been showcased in magazines including Phoenix Home & Garden.

Always one to stay active in her field, Shirley is a member, guild sale co-chairperson and past president of the Verde Valley Weavers and Spinners Guild.

She is also a member of the Sedona Visual Artists Coalition, Missouri Basketweavers Guild and the National Basketry Organization. Shirley is past president of the Sedona Gallery Association. She continues to attend conventions and take classes to learn new techniques.

Shirley keeps meticulous records on her work, and she reports that she had created 250 pieces when she moved to Sedona. That number is now at 1,940 – and climbing.