No fans allowed for next 3 Rising home games 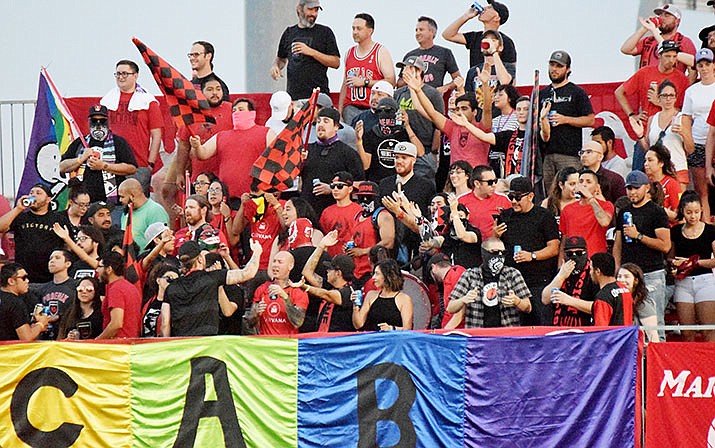 Phoenix Rising FC fans will not be able to attend the team’s next three home games because of coronavirus concerns. (Josh Martinez/Cronkite News)

PHOENIX – Phoenix Rising FC found itself on the positive end of an unfortunate situation.

The team was scheduled to face New Mexico United on August 8 in Albuquerque, but travel restrictions and a mandatory 14-day quarantine because of the coronavirus have halted those plans.

The teams are still scheduled to play, but the game has been moved to Casino Arizona Field in Scottsdale. With this change, the Rising will now play nine home games and only seven away. The USL had deemed an unbalanced schedule might be necessary depending on virus restrictions and guidelines.

Additionally, no fans would be allowed entry for the New Mexico game, as well as two others, the team announced in a press release. Home games on Saturday and August 15, against El Paso Locomotive and San Diego Loyal SC, respectively, will have no fans.

“Phoenix Rising hopes to host fans at Casino Arizona Field this season, once it is deemed safe to do so by local health officials,” the team said.

Rising coach Rick Schantz says playing with no fans is a different kind of challenge, but his team has to keep fighting.

“You have to remember why we play the game, and that love of the game has to carry you through,” he said. “But not having fans is challenging, that’s for sure.”

In the initial testing that is part of the NFL training camp reporting process, 21 players have tested positive for the coronavirus.

In the past week, rookies, injured players and quarterbacks were allowed to report to training camp. Veterans from many teams began reporting to camps on Tuesday, according to ProFootballTalk.

Though the NFL Players Association did not announce how many tests were done, it did say 107 have tested positive over the course of the offseason.

As a result of the positive tests, numerous players have opted out of the 2020 season. Reasons vary from personal health to protecting their families.

Before Tuesday, eight players had opted out. On Tuesday, there were 14 more.

Six of those 13 have come from the New England Patriots, including three-time Super Bowl champion and two-time Pro Bowl linebacker Dont’a Hightower.

Harry and the Patriots are scheduled to play the Arizona Cardinals in Week 12 on November 29.

The Arizona Coyotes have found their way to Edmonton and are preparing to hit the ice on Sunday against the Nashville Predators.

The NHL released the Phase 4 rosters for all 24 teams competing for the 2020 Stanley Cup. Each team was allowed to bring a maximum of 31 players into the Secure Zones in the hub cities of Edmonton and Toronto, according to the NHL Return To Play Plan,

“We worked pretty hard to put ourselves in a situation to make the playoffs and with everything that went on, we are in, so we’re just going to take advantage of it,” Garland said. “It’s going to be our first game so obviously there is going to be excitement even though it is a different situation than anyone has ever had, so it is new to everybody, and it is an even playing field.”

Some players have gone their entire NHL career without a playoff game, which they say contributes to their excitement. It is the team’s first postseason run since the 2011-2012 season.