COVID spread consistent across county, regardless of mask mandate 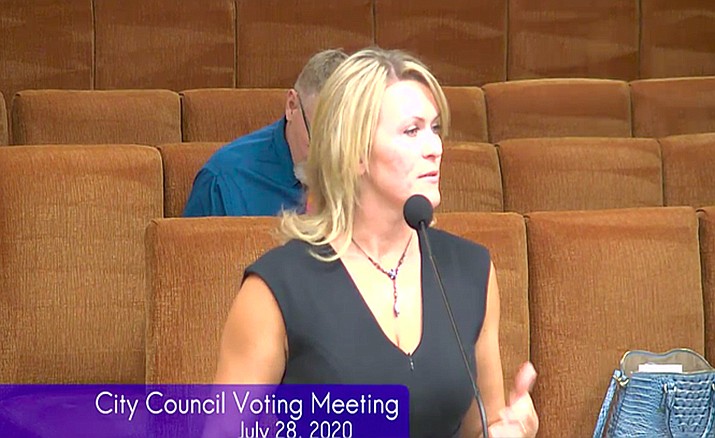 During Arizona’s recent COVID-19 surge, communities in the Verde Valley mandated face masks, while Prescott and the quad-city communities only encouraged them.

The result: “In Yavapai County, there’s no area that is seeing far more spread than others,” Horton told the Prescott City Council on Tuesday, July 28, during an update on COVID-19 numbers.

Overall, Horton said, people on both sides of the county appear to be wearing masks at about the same rate, regardless of whether a mandate was in effect.

“In the Verde Valley side of our county, Sedona, Cottonwood, Clarkdale, and Jerome all mandated masks. In Prescott and the quad-city area, none of the cities or towns mandated masks, nor did the county for the unincorporated areas,” Horton said. “And yet, when I’ve been in the Verde Valley, I see about the same amount of compliance of mask wearing.”

She stressed that mask wearing, along with physical distancing and good hand washing, are important practices in stemming the spread of COVID.

“So, I do appreciate that the leadership in our county continue to push those messages of when you cannot physically distance form others … make sure that you do wear a mask, especially in indoor environments,” Horton said.

The other thing to note, she said, “is the fact that our spread across the county has been very similar per community. With or without those mandates in place, we have seen a lowering in trajectory in cases across the county.”

Horton told the council that while she and local officials speculated early on that the community was experiencing its “peak” in COVID cases, the peak actually did not occur until later.

“Little did we know we had not at all reached our peak,” Horton said of those early numbers in April and May. “But hopefully from what we’re seeing now, I can say hopefully that our peak in COVID happened right at the end of June and early July.”

Despite an early spike of COVID cases during the outbreak at Mingus Mountain Academy, Horton said that outbreak ended up being relatively isolated. “After that outbreak, we did see a lessening of cases,” she said.

“They did drive us into being a hotspot in the country,” Horton said of Maricopa. “That brought a lot of media coverage, a lot attention to Arizona. We are thankfully no longer one of the hotspots, but as you can see we have had a spike in cases at the end of June. Now we’re on a downward trajectory.”

Much of Yavapai County’s spike occurred because of outbreaks in three care centers, Horton said, mentioning outbreaks in Cottonwood Village in Cottonwood, and Granite Mountain Rehabilitation Center and Brookdale Assisted Living in Prescott.

“We went from having 11 deaths in Yavapai County to today having 56,” Horton said Tuesday, July 28. “The majority of those – well over half – were associated with these outbreaks.”

Currently, she added that Yavapai County has a 5% to 6% positivity rate for COVID. In part, she attributes the relatively high rate to the targeted testing that went on at the assisted living facilities.

“Keep in mind, some of our testing is targeted to these assisted living sites or other areas where we know there’s going to be positive cases,” Horton said. “So when we do targeted testing, it brings that positivity rate up.”

City Councilwoman Cathey Rusing, a registered nurse, noted that “Early on, it became apparent that the basic practices of public health – masking, social distancing, good hand washing – were very important, simple ways to fight this virus and flatten the curve.”

Emphasizing the importance of getting that message out to the public, Rusing suggested that the county begin a public-service announcement campaign similar to the one that the state is conducting, but with a local emphasis.

Horton responded that her department has applied to the state for federal money to cover the cost of such a campaign.

“A large portion of what we’ve asked is devoted to a campaign for masking, physical distancing, staying home, and washing hands – all of those things,” Horton said. “We’re excited to do more community outreach and be more visible in terms of our community outreach.”