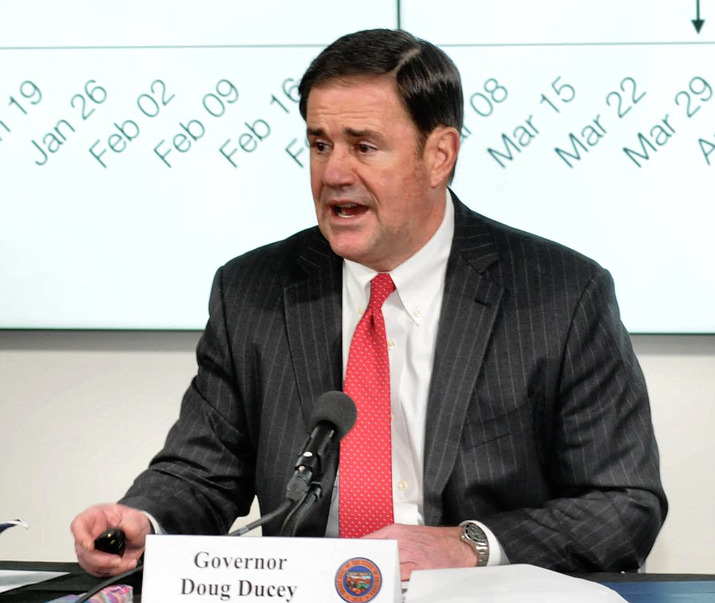 Gov. Doug Ducey answers questions Thursday about COVID-19 and the fact that expanded jobless benefits for more than 450,000 Arizonans are drying up. (Capitol Media Services photo by Howard Fischer)

PHOENIX - Gov. Doug Ducey said the state won't make up the money that Arizona unemployed will lose when the $600 a week in extra federal benefits dries up this coming week.

In fact, the governor said that he has no interest in raising the state's own jobless benefits from the current $240 a week, the second lowest cap in the country. He said that in normal times -- meaning before the pandemic -- there were plenty of jobs out there for people to find "at any time.''

A more immediate problem faces the approximately 452,000 Arizonans who collected some form of unemployment compensation this past week.

That program expires this week. And Congress has yet to approve either an extension or, if nothing else, some scaled-back plan.

Of that total Arizonans getting a check, the Department of Economic Security reports about 255,000 were getting only Pandemic Unemployment Assistance. That is the $600 a week Congress agreed to provide for individuals who do not qualify for regular state jobless benefits, including the self-employed.

Absent congressional action, they will get nothing this coming week.

The balance are those in the regular state unemployment system. That covers those who, through no fault of their own, became unemployed.

By law, they are entitled to one-half of what they were earning. But state lawmakers, at the behest of the business community, have capped payments at $240 a week, no matter how much the person was earning before, a figure that has not be altered since 2004.

With no congressional action, those state checks of no more than $240 will be all they get.

The governor said that's not his problem.

"I want to just say as clearly as I can that Congress needs to act,'' Ducey said. "This is on Congress.''

Anyway, he said, the state does not have the kind of money it would take to backfill the loss of federal dollars on any sustained basis.

"In Arizona, we live by a balanced budget,'' Ducey said. "And we don't have the ability to print money.''

Borrowing, the governor said, is not an option. That, he said, leaves the issue in the lap of federal lawmakers who have yet to reach a deal.

"If I have any advice for Congress it would be to turn around, order sandwiches in, stay the weekend and figure this out,'' he said.

And what of the people who find themselves with only $240 a week next week -- or nothing?

The governor said it's not that dire.

"We've worked very hard to ensure that Arizonans have resources that are necessary and that people are not losing a place where they live or their home,'' Ducey said. That refers to programs which for the time being forbid the eviction of tenants affected directly or indirectly by COVID-19 as well as some funds set aside to prevent foreclosure on mortgages.

In the meantime, the governor said he sees no reason to address the issue of unemployment benefits.

That still leaves the question of the adequacy of the state's own benefits.

"We've been working with the federal government on this,'' was Ducey's response. And he said there are other priorities in the state, including working with foster children and the developmentally disabled.

Any increase in state benefits would not affect the budget or raise taxes.

Instead, unemployment compensation is financed through a trust fund financed by a tax paid by employers on each worker's first $7,000 of salary. Rates range from 0.05 percent to 12.85 percent, based on how often each firm's workers end up collecting benefits because they have been laid off or fired through no fault of their own.

If the fund gets depleted, then the state automatically raises what employers pay.

Ducey said there's really no reason to even discuss the issue of that $240 cap.

"It's a hypothetical question because unemployment wasn't really an issue before the pandemic,'' he said.

For February and the first three weeks of March, the number of Arizonans collecting benefits fluctuated between 17,593 and 18,854, with the fund paying out about $3 million a week. Ducey said that a few thousand people signed up every month and "a few thousand people falling off.''

And Ducey said as far as he was concerned, there is no problem with that $240 cap.

"Those 17,000 people could all find a job at that point in time at any time,'' the governor said. "We had more jobs available than people to fill them.''

Ducey said he understands that "people have to use the social safety net for different reasons along the way.''

"But in terms of employment being available, that was there in February and early March,'' he said.