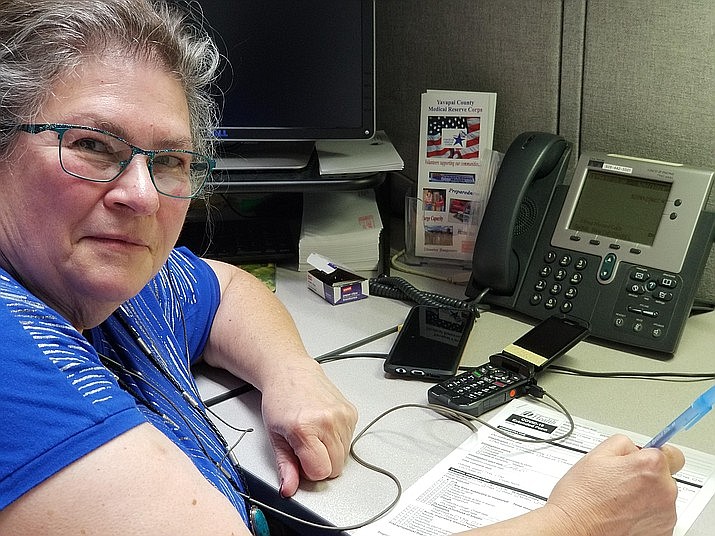 Yavapai County Community Health Services contact tracer Jo Ann French, a registered nurse for almost 50 years, sits at her desk where on a daily basis she makes 10 to 12 calls to those with positive results to try and thwart further spread. (Jo Ann French/Courtesy)

Jo Ann French is no stranger to the medical profession.

A retired registered nurse with more than half of her almost 50 years spent in public health, the former Yavapai County Community Health Services clinician admits the COVID-19 pandemic ignited a not-yet-dormant desire to deploy her expertise and fight back against the invisible foe in the place she calls home.

French is one of the health department’s lead contact tracers, a job she has performed during other epidemics. Not only is she calling folks who test positive with the contagious, and sometimes deadly, virus, but she is an instructor for others.

“I knew what I was getting into. It’s not something everyone can do,” said French, referring to her willingness to take the job when it was offered in late June. Hired to the department in 1996, French retired five years ago. “This is the first pandemic I’ve ever worked. We don’t get many of those. And I knew the county would be overwhelmed, and so I called and said I was happy to help. I enjoy being able to help my community and keep it safe.”

Public Health Coordinator Terri Farneti said French is a known entity with lots of experience they were glad to welcome back for this once-in-a-century endeavor.

“She is professional and thorough in her work, and a huge asset to the contact tracing effort for our department,” Farneti said. “Jo Ann has helped with training volunteer contact tracers and case investigators.”

On any given day, French is on the phone with as many as 10 or 12 folks identified with positive results – of all age ranges, genders and backgrounds. No personal visits are involved, she said.

“It’s an equal opportunity infection,” French said, noting children may not get as sick as senior citizens but can spread the disease to the more physically vulnerable.

Clearly comfortable talking to anyone, French said she approaches all calls from her nurses’ lens. She is an ear for both those who have suffered symptoms requiring a hospital visit and those with symptoms no worse than the common cold. She queries about 17 separate symptoms, including the unusual impact of this disease on one’s sense of smell and taste.

French, who has four step-children and nine grandchildren, passes no judgment even as she informs people about the wisdom of keeping one’s distance from one another and regularly washing hands with hot water and soap – hand sanitizer is OK but not a replacement.

When she asks people about their travels, and where they socialize, French said she finds people are frank and honest. Some younger contacts admit visiting bars or attending large group events minus masks and physical distancing.

In almost all cases, French said people are eager to do their part to thwart a further spread.

“Some might want to blame their mother-in-law, but then darn, we help them see that they also went here and did this,” French says teasingly. “You just can’t blame it on the first person you (visited).”

Part of the tracing requires notification of employers, colleagues or other places people might frequent – grocery stores are typically exempt as their turnover is great and transmission difficult to track, department officials said. Confidentially, too, is key, with tracers identifying contact without identifying an individual unless they give permission to do so, French and fellow department officials said.

“This is an unusual, infectious disease,” French said. “People are fearful before they meet the virus. Once they have met the virus, and done battle with it, and come out ahead, their worst fears have been met. They’re feeling good. Most are happy to share their information.”

Going forward, French said her hope is her friendly conversations convince people to be smarter than the virus, an opportunist that requires a place to live to thrive and spread.

“Social distancing is the primo way to stay away from the virus,” she concluded.