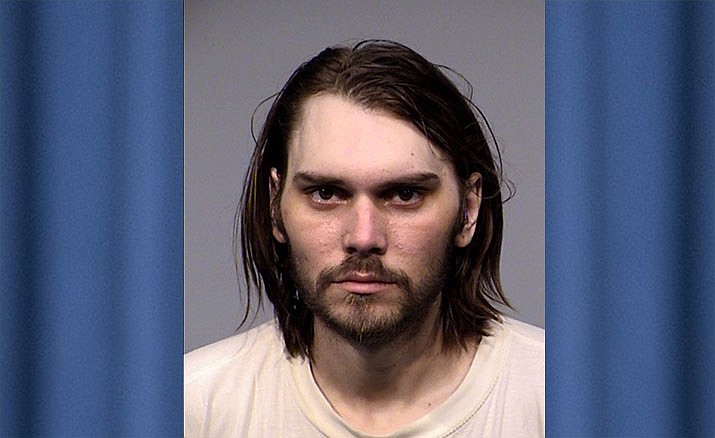 COTTONWOOD – Early on the evening of Friday, July 24, Cottonwood police officers conducted a traffic stop that led to a felony drug arrest, according to a news release.

Mathew Lee Gibson, 24, of Chandler, was stopped in the area of 15th Street and Cochise Street. for making an unsafe turn. Gibson was allegedly in possession of Fentanyl pills and drug paraphernalia, the release states.

The investigation was initiated by officers based on odor of marijuana emitting from Gibson’s vehicle and drug paraphernalia in plain view, police allege.

A search of the vehicle produced a green plastic bag containing 36 blue fentanyl pills, police said. There were also located several pieces of drug paraphernalia, including a marijuana pipe, plastic bindles, snort straws with residue and foil with burnt residue.

Gibson admitted to using fentanyl prior to the traffic stop. His lone passenger was cited and released for a misdemeanor: possession of drug paraphernalia.

He was booked into the Yavapai County Jail on charges of possession of narcotics (fentanyl) and possession of drug paraphernalia — both felony charges.

As of July 30, Gibson remains in the Yavapai County Detention Center on a paper bond of $5,000.