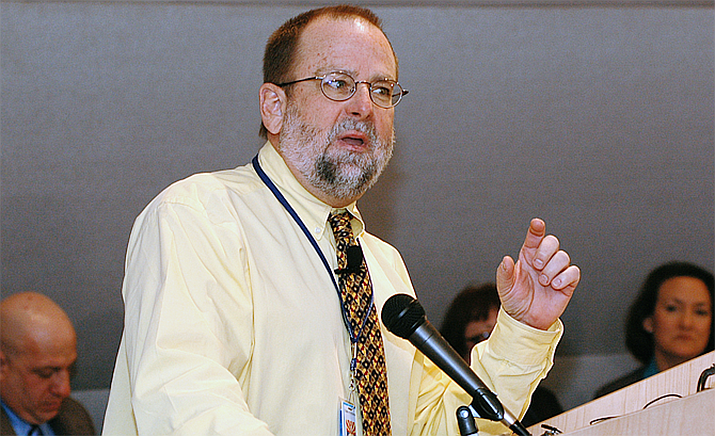 Former state health director Will Humble says Gov. Doug Ducey is "scientifically wrong'' in lumping gyms and fitness centers with bars as places that cannot be safely operated during the pandemic. In a document obtained by Capitol Media Services, Humble said there is no reason to keep these facilities closed any longer if they comply with the standards already proposed by current Health Director Cara Christ. (Howard Fischer / Capitol Media Services file photo)

PHOENIX - The former state health director says Gov. Doug Ducey is "scientifically wrong'' in lumping gyms and fitness centers with bars as places that cannot be safely operated during the pandemic.

In a document obtained by Capitol Media Services, Will Humble said there is no reason to keep these facilities closed any longer if they comply with the standards already proposed by current Health Director Cara Christ. In fact, he said, any gym or fitness center that meets those standards actually would pose less of a risk to public health than grocery and other retail stores that now are allowed to operate.

The formal declaration comes as part of a lawsuit by Mountainside Fitness which on Monday hopes to convince Maricopa County Superior Court Judge Timothy Thomason that he should overrule the governor's order that declares gyms and fitness centers cannot currently open, no matter what steps they take.

Hanging in the balance is not just the 18 locations of the locally owned operation. It could provide a basis to force the governor to give the go-ahead for other gyms and fitness centers around the state to reopen if they also agree to meet the standards, something that Ducey and Christ have so far prevented them from even trying.

Gyms and fitness centers had originally been closed in March, along with various other businesses, in an attempt to slow the spread of COVID-19.

Two months later Ducey agreed to ease up on those restrictions if gyms met guidelines set by the Centers for Disease Control and Prevention which require "strict physical distancing and sanitation protocols.'' Based on that, Mountainside and many other facilities reopened.

At the end of June, however, with a spike in infections, the governor reversed course, closing not just gyms but also bars, movie theaters and water parks. But Ducey promised at the time that the health department would develop protocols before July 27 to allow the gyms and fitness centers to reopen.

There is now a draft. But Ducey has since extended the closure order for those facilities for another two weeks -- if not longer.

Humble, asked to review those guidelines by Mountainside, said there's no reason for that.

"In my opinion, if implemented by a fitness facilities, the proposed guidelines are sufficient to make a fitness facility as safe as any other ordinary business operating pursuant to observance of state of Arizona COVID-19 safety protocols, such as a home improvement retail store or grocery store,'' said Humble, now executive director of the Arizona Public Health Association.

"Indeed, because the proposed guidelines are very specific and more stringent than the standards applied to normal commercial businesses, my opinion is that any fitness center adhering to the proposed guidelines presents and equal or even lower risk of transmission of COVID-19 than, per prior examples, a normal retail establishment or grocery store,'' he said. Humble He said he was not paid for his opinion.

Attorney Joel Sannes hopes to use that declaration at Monday's hearing to convince Thomason that there is no legitimate health-related reason to keep his client from serving its customers.

Humble sought to underline his point that the gyms and fitness centers should never have been lumped into the governor's June decision to shutter bars to stop the spread of the virus, saying there are clear distinctions.

"Despite may training and three decades of experience in public health, I am unable to propose a mitigation plan for a nightclub or bar that I could state with any degree of confidence would successfully mitigate the risk of COVID-19 transmission,'' he said. The difference, he said, is the nature of each kind of business.

"The interactions between customers are predictably in close proximity,'' he continued. "Chairs are frequently not fixed to the floor or else are not used, noise levels drive conversation participants closer together, and alcohol impairs judgment and invites risk-taking.''

By contrast, Humble said, the goal at a fitness center is exercise and healthy behavior.

"Exercise equipment can be easily spaced out for proper social distancing,'' he said. "Fitness center members are not ingesting alcohol and are not inebriated, and therefore can read printed wall signs discussing member hygiene requirements and can use good judgment to comply -- or be asked to leave.''

And Humble said people, in general, go to gyms to exercise, not to socialize.

"The governor is scientifically wrong to equate the risk posed by those two groups of businesses,'' Humble said, calling any such attempt to compare a bar with a fitness center operating under the proposed guidelines "a false equivalency."