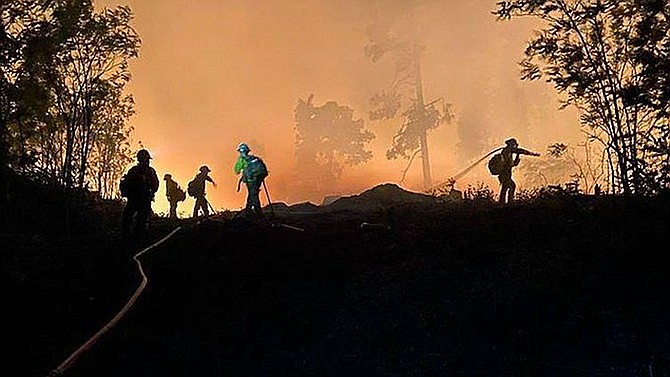 The Bighorn Fire, which grew to 119,000 acres northwest of Tucson in the Coronado National Forest, is now 100% contained, as are most other fires in Arizona. The Pine Fire, burning southeast of Camp Verde was still producing smoke visible in the Verde Valley, as of early Friday afternoon. Courtesy of U.S. Forest Service

PRESCOTT NATIONAL FOREST – According to the U.S. Forest Service, smoke might be visible in the Verde Valley, stemming from the Pine Fire.

Burning in the Pine Mountain Wilderness since July 12, the Pine Fire is only about 2,100 acres and is 90% contained. However, the mountaintop fire continues to show smoke to many parts of Northern Arizona.

The Verde Ranger District fire, started by a lightning strike, became visible again after days of drying out from last week’s storm at an unnamed drainage south of Bishop Creek.

The remote Pine Mountain Wilderness would present challenges to extract injured personnel if an incident were to occur. Contingency plans, as well as a Fireline Medical Team, are in place.

Forest-ordered closures are in effect as of July 27. Fire managers and forest personnel will go in and evaluate the fire area to mitigate any hazard trees along the wilderness trail systems for public safety.

Another fire is burning about 20 miles east of Kanab, Utah, right along the Arizona state line. The 9,000-acre, lightning-caused Pine Hollow began Wednesday and has led to the evacuation of a campground, but no residences.

Two blazes on opposite sides of the Grand Canyon are both at 100% containment. The Mangum Fire, which started near the North Rim, burned 71,000 acres, while the more recent Thumb Fire burned about 8,400 acres along a rugged part of the South Rim, west of Grand Canyon Village.

All other fires in Arizona are either 100% contained or are in very remote areas and are not spreading quickly.