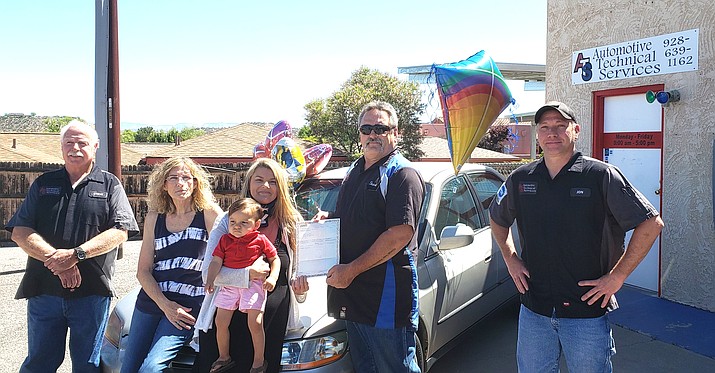 Friday, May 22, Christiana Duran, holding her son, Koa, and with her mom, Carla Williamson, received a free car from Automotive Technical Services. Pictured with Christiana are Steve Clark, Steve DeWillis and Jon Schoenhardt.

Back in March of 2020, Christiana Duran was returning to her work at Baumbody Works Salon and Spa in Cottonwood, and was T-boned right in front of her workplace, totaling her minivan.

“I didn’t realize how fast the other car was going when I turned across traffic,” said Duran. “I was knocked unconscious, and my neck was broken in two places, and I needed to be flown to Flagstaff for treatment.”

Duran has had a long recovery and even after two months she is still in a neck brace but doing well. The accident left the single mom without a vehicle.

Automotive Technical Services is veteran owned and operated and is located right behind Baumbody. ATS owner Steve DeWillis saw the wreck and felt sorry for Duran.

“Her being a single mom and not having another car and going through this experience, I felt like I had to do something to help her out,” said DeWillis.

ATS had recently acquired a 1998 Honda Accord from a customer that did not wish to spend the money to fix it.

“I asked my guys if they wanted to help to fix it up and give it to Christiana and they said they would be all for it,” said DeWillis.

ATS reached out to management at Cottonwood AutoZone and Big O Tires for donated parts to help repair the car.

“This project was a group effort on all parts,” said DeWillis.

Once ATS determined they could get the car running for Duran, DeWillis contacted Baum Body Works Manager Morgan Garcia to contact Christiana about the car for her. Duran was still in the hospital when she found out that ATS was giving her a car to help her out. She was overwhelmed by the kindheartedness and was so thankful because she didn’t know how she was going to afford another car. Her son goes to Head Start in Clarkdale and she was worried how she was going to get him there. “It was such a relief to know that I would be able to do that,” she said.

ATS is grateful for the generosity of local businesses and community support to make a difference in this young woman’s life.