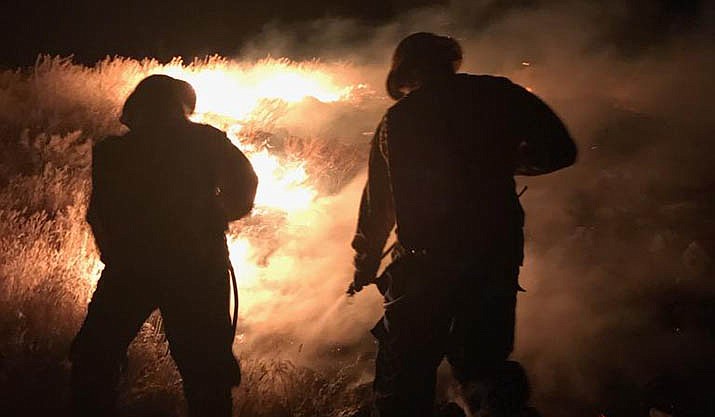 COTTONWOOD- Sunday evening, May 31, the Cottonwood Fire Department, with the assistance of the Verde Valley Fire District, responded to three brush fires within a 30-minute period, according to a news release.

While fire cause and origin are still under investigation on all three fires, initial indications are that all of these fires were human-caused, the release said.

The first fire was reported just after 8 p.m. in a field north of the roadway in the 200 block of East Mingus Avenue. Firefighters found an active fire in grass and brush located on a large undeveloped property and were able to quickly limit fire spread and extinguish the blaze.

That fire was contained to an area of less than an acre.

A second fire, in the 700 block of North Verde Heights Drive, was spotted by an off-duty Cottonwood firefighter, who had been responding to the first fire. The firefighter stopped his vehicle and extinguished the fire, limiting it to an area of less than 200 square feet.

A third fire was reported on hill behind the Rio Verde RV Park in the 3400 block of East State Route 89A.

Cottonwood and Verde Valley firefighters were able to quickly contain the fire and limited fire spread to less than two acres. Additional assistance was provided by the Cottonwood Police Department and Verde Valley Ambulance Company.

Fire departments remind citizens that Arizona vegetation is drying quickly with the warm, dry, weather. Everyone should be extremely careful with fire and all flame- or spark-producing devices.