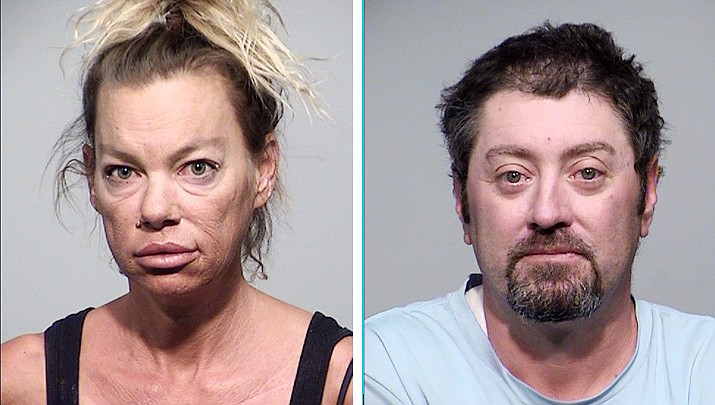 After being pulled over on I-17 for being wanted in a resort theft-of-services case, Stacy Accomazzo was booked on charges that included extreme DUI, while Matthew Ellison’s charges including assault per domestic violence. Courtesy of Yavapai County Sheriff’s Office

SEDONA – A Sunday afternoon call to police for failure to pay resort charges led to a traffic stop on an interstate, a 0.35 blood-alcohol result and a felony charge, according to a news release.

Sunday, at about 12:45 p.m., Yavapai County Sheriff’s deputies were called to the Enchantment Resort, west of Sedona, regarding a failure-to-pay investigation.

The incident involved 45-year-old Stacy Accomazzo and 38-year-old Matthew Ellison, both from Litchfield Park. Security officials told deputies the pair tried to extend their stay but already owed $675 for food and alcohol.

The couple then got in their car and left, security staff said, “flipping off” surveillance cameras on the way out.

An attempt-to-locate bulletin was issued to area law enforcement agencies.

While a deputy was taking the report, the suspects passed another YCSO deputy at a high rate of speed in the right lane of southbound I-17 near Middle Valley Road. As deputies began pulling over the vehicle, they saw Ellison assault the driver, Accomazzo.

Deputies also reported that Accomazzo was attempting to conceal what was later determined as open container of alcohol.

Accomazzo was booked on charges that include a felony charge of endangerment, due to reckless driving endangering nearby motorists. She also faces extreme DUI and theft-of-services charges.

Ellison was booked on charges that include assault per domestic violence and theft of services.