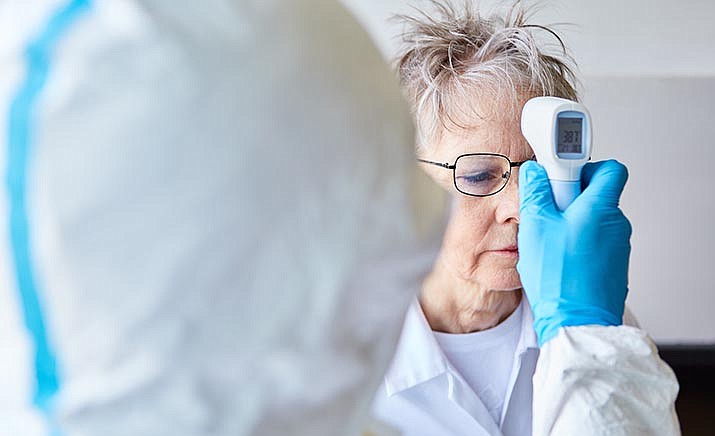 In a 23-page order late Friday, Maricopa County Superior Court Judge Christopher Coury said that which nursing homes have residents who have contracted or died from COVID-19 is protected under a 2002 law regarding information provided by businesses that, if disclosed, could harm its competitive position. Adobe Stock photo

PHOENIX - Arizonans won't be learning which nursing homes have residents who have contracted or died from COVID-19 -- at least not from the state.

But the judge also noted that the materials are being gathered by the Department of Health Services under a 2002 law which allows the governor to declare an Enhanced Surveillance Advisory. More to the point, he said that law has various provisions making confidential what the nursing homes provided.

About the only thing Coury conceded is the media outlets that filed suit may be entitled to information about the availability of "personal protective equipment."

But he said that will require a full-blown trial to determine whether state health officials must provide it.

In arguments to the court, attorney David Bodney said the public is entitled to the information.

He said the laws on confidentiality protect only the names of individuals. Bodney, representing the Arizona Republic as well as Phoenix TV channels 3, 5, 12 and 15, said what is clients want -- and are entitled to -- are entitled to are the pure numbers of residents of each facility who have contracted the virus and the numbers transferred to hospitals, not the names of any individual resident.

But Coury did not read the language of the statute so narrowly, saying the law protects all "medical information,'' regardless of whether it identifies individual patients.

He also said the 2002 law has a specific provision protecting information provided by businesses that, if disclosed, could harm its competitive position. And Coury said that disclosing the number of residents of a specific facility who contracted the virus or have died from it may injure the business.

And the judge said it's even more complex than that.

He said nursing homes deal with people who have other underlying conditions, none of which can be disclosed. So releasing only data on COVID-19 cases "could be deceptive and injurious to business interests if released in a vacuum.''

In explaining his ruling, the judge said he is simply following the law -- at least as best he can understand it.

"It is not the position of the judicial branch to enact legislation or create policy,'' Courty wrote, saying that belongs elsewhere,'' he wrote. And the judge said while people have died, the economy has been impacted and personal lives have been altered, he cannot ignore the statutes.

"Were this judicial officer to ignore the law, Arizonan's Constitution -- and its provisions of limited government and separation of powers -- would be added to the list of COVID-19's victims,'' the judge said. "Although difficult in the face of this devilish virus, fidelity to the Constitution and the laws of the state of Arizona must prevail.''

He also pointed out that Ducey has since amended his executive order to require that nursing homes tell relatives of those staying there if there are outbreaks. Anyone who is applying for admission to a nursing facility also is entitled to the same information.

Separation of powers aside, Coury said, the 2002 law is hardly a model of clarity.

He pointed out that state lawmakers, rather than relying on model legislation, opted to create the statutes on surveillance in cases of medical and health threats from scratch.

"The act -- the legislation authorizing the actions at issue -- lacks clarity,'' the judge wrote, leaving critical terms "undefined.'' And he said no one has bothered to look at it for 18 years as there has not been a health emergency since that time.

"Nonetheless, if this decision illustrates nothing else, it highlights the need for the legislature to revisit the act and make it more workable for all concerned,'' Coury said. "In its present form, the ambiguous act does a disservice to the media, to government leaders, to the courts, and to all Arizonans.''

Bodney, in a prepared statement, said he believes the judge got it wrong in deciding that the health department can keep the information secret.

"We see no possible overriding interest in nursing home business that requires confidentiality of this information, especially during the pandemic,'' he said. And Bodney said all he and his clients want is aggregate numbers of infections and deaths, not any names.

Dana Kennedy, the state director of AARP, said she was disappointed by the ruling.

"In the fact of this crisis, nursing home residents, prospective residents, and their families deserve to know if a facility has experienced COVID-19 cases or deaths,'' she said in a prepared statement Friday. "Today's ruling keeps Arizonans in the dark about the true state of our nursing homes and the health of their residents and staff.''

Friday's ruling does not mean nursing home data will remain confidential. The Centers for Medicare and Medicaid Services is now collecting information from the facilities it regulates and has promised to make it public.