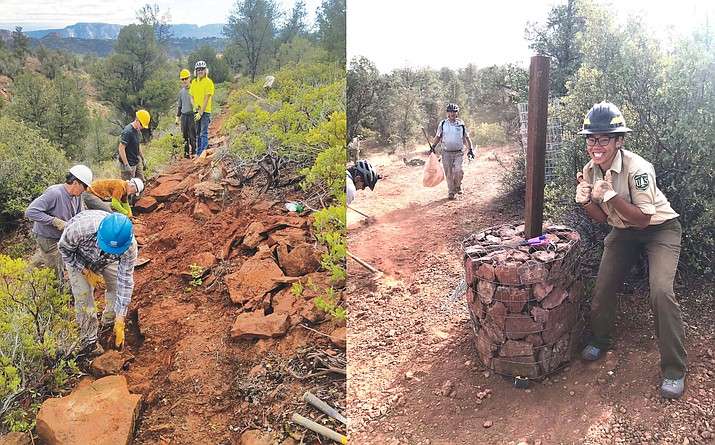 Access to the 30 miles of Western Gateway Trails is from Cultural Park Place in West Sedona, or from the Aerie Trailhead. Courtesy photo

The Western Gateway area was first identified as important for trail access in the 1998 revised Coconino National Forest Plan which identified the area as a “trail access hub” for a robust non-motorized trail system.

Over the next two decades the project evolved into a community driven trail system. Many locals know this area as “the cultural park." City of Sedona officially recognized the public value of trail access from “the cultural park” during their 2014 Western Gateway Community Focus Area public outreach.

In November 2018, community volunteers and Forest Service trail crew broke ground on the Western Gateway trails. This was the first of 19 volunteer workdays through April 2019 when the field season gave way to intense summer heat and monsoons.

The December 22, 2018 – January 25, 2019 federal shutdown had little project impact. As the shutdown dragged on it threatened the start of youth crew work from the American Conservation Experience (ACE) and volunteer workdays.

Originally scheduled to begin in January 2019 and funded, in large part, by a $25,000 National Forest Foundation (NFF) Matching Award Program (MAP) grant, the Forest Service determined that the work was essential, recalled the FS trail crew and allowed work for eight weeks. The shutdown ended soon after.

Over 50 local and dedicated volunteers came out on the first post-shutdown workday on January 31, 2019 to help build trail. Twenty trail miles were constructed, adopted or naturalized in season one.

Season two kicked off in October 2019 when 32 volunteers turned out for the first of 15 volunteer workdays. Additionally, two contracted youth crews began work in January 2020 again funded by a NFF MAP grant.

This crew finished just prior to all work shutting down due to the coronavirus pandemic in mid-March. FS trail crew finished the project in early April 2020. In season 2, volunteers, ACE and the FS crews constructed the final 10 miles of trail and maintained 29 miles of trail.

An official Western Gateway trail system dedication ceremony will be held when COVID–19 safety protocols allow for this event. Access to these new trails is from Cultural Park Place in West Sedona, or from the Aerie Trailhead.