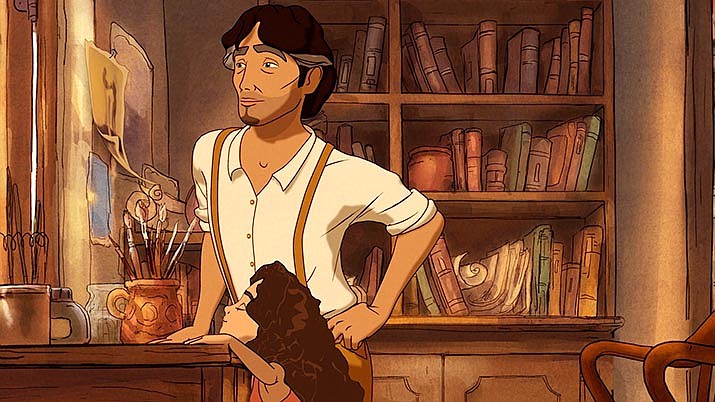 As part of the live-streamed program, leading Sedona coach and soul guide Anahata Ananda will lead participants in a post-screening Reel Healing entitled “Finding Freedom Within.”

The virtual screening, Q&A and Reel Healing will show on Thursday, June 4 at 5 p.m. PDT on illuminate.eventive.org.

Called a “work of essential spiritual enlightenment” by Variety Magazine, the film is a stunning visual adaptation of Kahlil Gibran’s The Prophet, one of the most popular volumes of poetry ever written and cherished guide to life, death, love and art.

Chock full of wisdom, Gibran’s timeless verses have been given enchanting new form in this painterly cinematic adventure about freedom and the power of human choice and expression. This groundbreaking use of animation for divine storytelling will excite both adults and children alike, lovers of the classic text, as well as novices to Gibran’s work.

The movie’s story centers around Mustafa, a beloved poet who is under house arrest in the foreign city of Orphalese. As he imparts his gentle wisdom on a variety of topics related to a life well lived, audiences are carried on the wings of his words, enriched by the timely and artistic expression of what it means to be vibrantly alive.

In May 2014, a work-in-progress version of The Prophet was screened at the prestigious Cannes Film Festival, after which it had its Southwest Premiere at ILLUMINATE Film Festival in Sedona, where it earned rave reviews and the festival’s 2015 Director’s Choice Award.

Roger Charles Allers is an American film director, screenwriter, storyboard artist, animator, and playwright most well known for co-directing The Lion King, the highest-grossing 2D animated film of all time, and for writing the Broadway adaptation of the same name.

Prior to The Lion King and The Prophet, Allers worked as a storyboard artist or Head of Story on many Disney movies including The Little Mermaid, The Prince and the Pauper, The Rescuers Down Under, Beauty and the Beast and Aladdin. He also directed Sony Pictures Animation’s first feature-length animated feature, Open Season (2006) featuring the voice talents of Martin Lawrence and Ashton Kutcher.

Allers received several International Film Festival Awards for his Oscar-nominated short film, The Little Matchgirl (2006), and was nominated for a Tony award, for co-writing the book for Disney‘s Broadway musical, The Lion King.

Allers was raised in Scottsdale and attended Arizona State University.

The Power of Film

“The late Barbara Marx Hubbard taught us that crisis breeds innovation. If we are to embrace her teachings, we not only question the new normal that is emerging, we create it.” says Danette Wolpert, executive director of the ILLUMINATE Film Festival, “And we know the changes, if they are to be widespread and lasting, begin within. Films and media can plant the seed of change within us, help us to make new choices, dream new dreams and create new ways to live, so that we may look back a year or more from now and see this Great Pause as the driver of who we have become.”

The virtual film screenings take place at a scheduled time, but will be available for a 24-hour replay period. The programs can be watched on a computer, tablet, mobile device or smartTV (through mirroring). The films can also be watched on AppleTV via the Eventive app.

To reserve a free ticket to the virtual at-home screening of Kahlil Gibran’s The Prophet, visit illuminate.eventive.org. Space is limited.

ILLUMINATE Film Festival, a 501(c)3 sponsored organization, is the world’s premier film festival for conscious cinema. Founded on the premise that the language of film is universal and a dynamic force in carrying messages to the masses, the Festival showcases the best of transformational media to uplift, inspire, and transform. For more information, visit www.illuminatefilmfestival.com or call 928-421-1108.