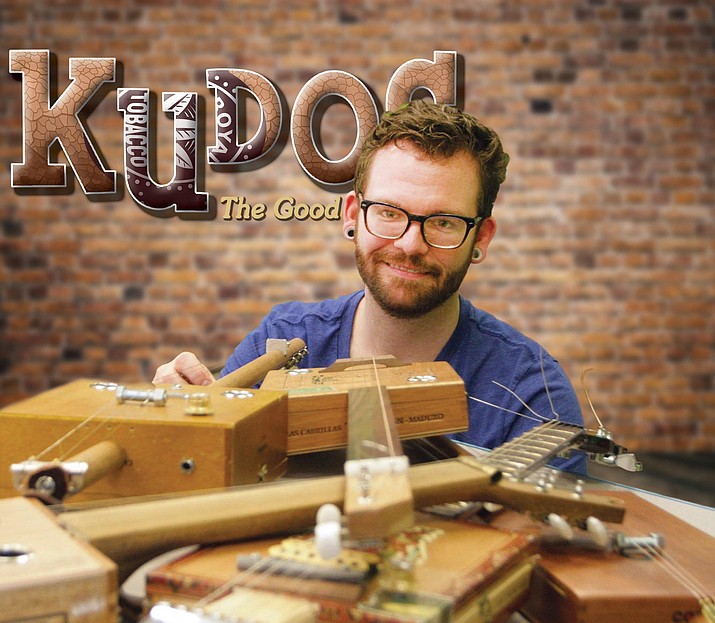 During the COVID-19 pandemic, Zack Garcia, teen librarian at the Camp Verde Community Library, debuted a YouTube video that shows how to make a guitar from a cigar box.

How to build a Cigar Box Guitar by YAC CampVerde

During the COVID-19 pandemic, Garcia, teen librarian at the Camp Verde Community Library, debuted a YouTube video that shows how to make a guitar from a cigar box.

Garcia has been playing the guitar for much longer than he’s been constructing the instrument. But he first introduced the art of making cigar box guitars – CBG – to the library during the 2018 Summer Reading Program: Libraries Rock!

“Being a musician, I was excited about it,” Garcia said. “I had built my first cigar box guitar from a box my grandfather had given me sometime before, using parts I had lying around in my garage.”

Garcia said that although cigar box guitars typically have three strings, they can have as many as six strings – or as few as one.

Most important about building your own cigar box guitar – there are no rules.

“There is no right or wrong way to build them, and you can design them using just what you have on hand, or order parts for a specific design,” Garcia said. “They originally were homemade instruments built by those who couldn’t afford a conventional guitar.”

How long does it take to build?

Garcia has spent as little as an hour building a cigar box guitar, as many as 10 hours on others. The design and the detail, he said, will dictate how long it takes.

What he called the broomstick-through-box design can be built in about an hour.

“There is minimal measuring and is very quick and easy,” Garcia said. However, if you want to use a conventional guitar neck, or build a flat neck from scratch with a fret board, that “can take much longer.”

Garcia said his last two builds each took about 10 hours. One of them, he built the neck from scratch, which he said required measuring, gluing, clamping, drilling, sanding, and finishing.

“If I had installed frets (it is a fretless slider) that would have taken more time and precision as well,” Garcia said. “For each of them, I had to fit the neck to the box. The scratch-built neck runs through the body, but required square cuts in each side, and the other used a dovetail joint. Each of these took more planning than just cutting two circle holes in each end of the box.”

Is the sound different from a conventional guitar?

Pick up the guitar, then strum across all the stings without pressing on any frets. You’re just making noise.

However, cigar box guitars are “usually tuned to an open chord, usually open G, D, or E,” Garcia said. What this means is that strumming across all the chords open will produce a chord.

“If it is tuned to open G, strumming across all the stings produces a G chord,” Garcia said.

Cigar box guitars can be fretted or fretless. Garcia said he plays the fretless guitars with a slide.

“Because of the open tuning, barring the slide across all the strings anywhere on the neck will produce a chord,” Garcia said. “All this adds up to an instrument ideal for blues slide playing.”

For Libraries Rock, Garcia researched, then made a list of parts “for a kit that we could use for a program building CBGs, where each teen who built one got to keep it.”

Cigar boxes were donated by the community, and all of the hardware was donated by Camp Verde Ace Hardware, Garcia said.

“My first guitar had real guitar tuners, a telecaster neck pickup, and a nut made from angle aluminum,” he said. “The guitars for the program would be similar, but more rudimentary, using bolts for the nut and bridge, and eye bolts and wingnuts for the tuners, but maintaining the broomstick-through-box design.

Garcia said that the “handful of kids who made them really enjoyed them.”

“But I still have quite a lot of leftover materials,” Garcia said. So, with the library closed due to the pandemic, Director Kathy Hellman suggested Garcia make a tutorial video for the community on how to build a cigar box guitar.

The video can be found at youtube.com/watch?v=HsRJfmcLftk&feature=youtu.be.

Garcia learned that making a video tutorial is different than teaching someone face to face.

“That was a learning experience itself. But in making that video, it got me into creative mode and I wanted to build more guitars,” he said. “I ordered some parts online, tuners, bridges, nuts, and string ferrules, and went to work. Since making the how-to, I’ve built two new guitars, and would like to keep building more. Each build is unique, slightly different from those that came before.”