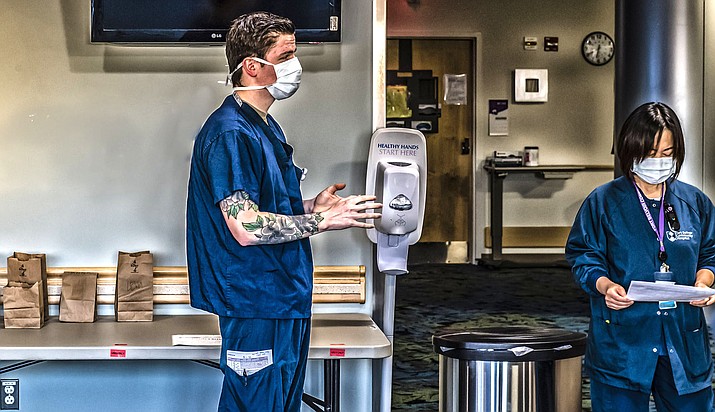 Health care workers at Fort Belvoir, Va., shifted operations to handle more COVID-19 cases in this photo from late March. A recent surge in cases of the coronavirus in Arizona is starting to pressure the bed capacity of some hospitals in the state, but experts say the facilities have managed to adapt so far. (Photo by Reese Brown/U.S. Army, Fort Belvoir)

Surging numbers of COVID-19 cases in Arizona have pushed some hospital intensive-care units to their limits in recent weeks, but health experts around the state said hospitals still have room to adapt – for now.

The Arizona Department of Health Services has recorded 8,360 new cases of the coronavirus so far this month, almost 30% of the total 28,296 cases since the disease was first reported in the state in January.

Those new patients are putting a strain on hospital beds, with 76% of ICU beds occupied as of Monday. Hospital administrators said they are coping, but one nurse said seeing the constant stream of COVID-19 patients is “soul-crushing.”

“I didn’t use to dread going to work but when I know I am going to be in the COVID unit, I dread it. I have the best job in the world but it’s just – soul crushing is just the best way to describe it,” said Austin Kopas, an ICU nurse in Phoenix.

Experts say the pinch is being felt around the state, from hospitals in Phoenix to those in rural areas. At Yuma Regional Medical Center, officials said close to half of the ICU beds in use Tuesday were occupied by COVID-19 patients.

“So right now we’re able to manage everything we’ve got coming in,” said Dr. Robert Trenschel, the Yuma hospital’s CEO. “The issue comes in when we get quite a few of COVID patients coming in at the same time. Sometimes it’s a family of five or six that comes in.”

Hospitals are coping with the surge by shifting patients from maxed-out hospitals to those that still have space, a practice known as “load balancing.” Becky Armendariz, a spokeswoman for Banner Health, described it in an email as “when you transfer patients or resources from one hospital to another so that no one hospital is stressed or overwhelmed with cases.”

Banner is also “upskilling,” training health care workers who do not normally work in an ICU to assist there.

The state health department reported Monday that 76% of the state’s supply of ICU beds were occupied, leaving 24% available. Dr. Daniel Derksen said that state hospitals should be able to handle the patient load for the time being with the measures they are currently using.

“Once we start getting in the single digits (for percentage of available beds), then we really have to employ other interventions to make sure you have the capacity to deal with what’s going on,” said Derksen, a University of Arizona professor.

Gov. Doug Ducey in March gave hospitals a month to develop plans for increasing ICU bed capacity by 50%, but Derksen said it is not clear how many hospitals met that goal. State health officials reminded hospitals over the weekend that they need to have those plans ready.

Derksen said the extra beds – and the workers needed to staff them – come from different areas of a hospital, which may be called on to contribute equipment, beds, staff and space.

Will Humble, the executive director of the Arizona Public Health Association said there’s no single way for hospitals to make room for inpatient beds, calling it a “multipronged approach.”

One way hospitals can make the most of their space is by repurposing, turning a recovery room into an infectious disease ward, for example, or dedicating entire floors to COVID-19 patients.

The problem with that, Humble said, is that it requires staff to work overtime. That means someone who normally does surgeries would also have to work longer hours to see COVID-19 patients as well.

Humble said hospitals’ hardest decisions will come down to patients: They may have to begin delaying or canceling elective procedures, or start looking into discharge planning. That means discharging patients to a rehabilitation hospital or sending them home instead of recuperating in the hospital, “even though under normal circumstances, you wouldn’t do that,” he said.

Derksen said the increase in COVID-19 cases is “almost certainly” the result of Ducey relaxing social-distancing and stay-at-home orders on May 15, when the spread of the disease appeared to be waning.

That allowed for packed public spaces during the Memorial Day weekend, followed by protests last week over the death of George Floyd that health officials worry could also end up spreading the virus.

“It seems like because the state is opening up, people think it is going away,” Kopas said. “It is getting much worse, extremely quickly.”

Mark Coleman is a registered nurse who has gone part-time after deciding to go back to graduate school to become a family nurse practitioner. He has adjusted from working full time to one shift every two weeks, but Coleman said he has lost trust with government officials and hospital administrators because of the “abusive” treatment he said nurses have endured during the pandemic.

That treatment will hurt health care in the long run by discouraging nurses, he said.

“I’d say it definitely hurts the community because less nurses wanting to go to work or be involved in their job is not a good sign,” he said.

Kopas said the safety protocols involved with COVID-19 can add work to even the simplest tasks, noting the case of one patient who called him back right after he had left the room. Unit rules require that gowns, goggles, and masks be wiped down with bleach and hung up to dry after every patient visit.

But when the patient called, Kopas “put on a mask that was still wet with bleach and put on everything just to go into the room” for what turned out to be an itch. The patient had been in bed so long that he lost the ability to do anything but move his fingers, so Kopas scratched the patient’s leg “for him because he is not strong enough to move.”

Kopas said he has been treating COVID-19 patients since “the whole thing started,” and while he loves his job, recent months have been draining. He said one of his main fears now is that the virus “is something that will never go away,” that there’s no guarantee of a vaccine and that society will have to adjust to a new norm of social distancing.

He does not want to be the guy who says, “The sky is falling!,” but Kopas said it can be hard to be upbeat.

“It’s hard not to be pessimistic when you go and see it all of the time,” he said.