Despite more COVID-19 cases, Arizona governor will not re-impose restrictions
Medical director: 'We are not going to be able to stop the spread' 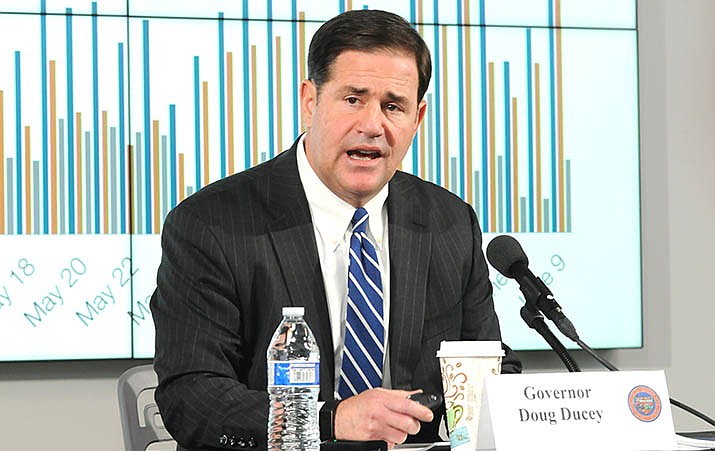 Gov. Doug Ducey discusses the latest trends Thursday in the spread of COVID-19 in Arizona. Despite a record number of COVID-19 hospitalizations and more than 1,100 deaths, the governor said he's forging ahead with a phased-in re-opening plan. (Capitol Media Services photo by Howard Fischer)

PHOENIX - Gov. Doug Ducey said Thursday he does not intend to impose new restrictions on Arizonans -- or even require them to wear masks -- despite more people contracting COVID-19.

In fact, look for him to actually move in the opposite direction.

"We're seeing increasing cases,'' he said during a media briefing.

That was underscored by figures from his own Department of Health Services showing a record 1,291 patients in Arizona hospitals. And that doesn't count another 429 in intensive-care beds, a figure exceeded only by a peak of 438 just three days earlier.

And the number of COVID-19 patients seen in the emergency room his 848, trying a record set just two days ago.

All totaled Arizona has now logged 31,264 confirmed cases of the virus with 1,127 deaths, including 34 just Thursday alone.

But the governor is undeterred, rebuffing a question of whether he would consider reimposing some of the restrictions he first put in place in March like his stay-at-home order and restricting commercial activity to only essential businesses.

"It's not under discussion,'' he said.

Instead, Ducey is focused on moving forward.

"We're going to continue our gradual and phased-in reopening,'' the governor said. "We will balance public health with public safety."

State Health Director Cara Christ put a finer point on it, saying the measures that had previously been imposed were designed to ensure that Arizona had enough hospital capacity to deal with an outbreak.

"We know that it's in the community,'' she said.

"We are not going to be able to stop the spread,'' Christ continued. "And so we can't stop living as well."

Ducey acknowledged that his efforts have had a two-pronged approach.

"This has always been about saving lives,'' he said.

"And it's also about livelihoods in the state of Arizona,'' the governor continued. "We're going to do this in a balanced and responsible way for the people of Arizona.''

Christ separately acknowledged that there have been some "hot spots,'' places in the state where the virus has spread quicker than elsewhere. But Ducey rejected the possibility of giving city and county officials the option of imposing their own restrictions.

"I believe that the government that is closest to the people is best -- except in a global pandemic,'' he said.

"We want to have clarity and consistency for our citizens,'' Ducey said. "And we want to reduce the confusion that's happened across the state and across the country.''

Ducey and Christ have repeatedly argued that Arizona has more confirmed cases of coronavirus than elsewhere because the has been testing more people.

But statistics from Johns Hopkins University, updated Thursday morning, show that Arizona, at 13 percent average, has a higher rate of the tests that come back positive than any other state. And the Biodesign Institute at Arizona State University found the positive test rate for Wednesday, the most recent figures available, actually hit 24 percent.

"We have noticed an increase in the percent positivity,'' Christ said.

"We do know there is community spread,'' she continued. "We are going to be working at trying to bring that back down."

Part of that, Christ said, will be a "public health message.''

What that message includes, she said, is encouraging people to wear a cloth face covering when they cannot "physically distance'' from others and to make sure that they're staying home when they're feeling sick.

"I'm all for face masks when you can't physically distance,'' he said. And the governor said he does wear a mask in those circumstances.

"I was in Walgreens picking up some things on the way home and I've been to the grocery store,'' Ducey said. "And in both places, I wore a face mask.''

But all that remains voluntary.

"There are some people that can't wear masks for whatever reason, shortness of breath or they are asthmatic,'' the governor said.

Christ did concede that reports from some hospitals -- they self-report and she did not name names -- showed that more than 80 percent of their beds were occupied. That is a trigger point at which, under the governor's executive orders, a facility can no longer do elective surgery.

But the health director said she has not clamped down on any of them, saying she wants to work with hospital administrators to see if they agree with the numbers.

Ducey, for his part, said he was unconcerned even if hospitals do hit that 80 percent level.'

He pointed out that all facilities are required to have plans in place to expand the number of beds by at least 25 percent if needed. The state also purchased the old and vacant St. Luke's Hospital in Phoenix and is keeping it in what Christ calls a "warm ready'' situation should the beds there be needed.

Members of the Health System Alliance of Arizona, which make up about 80 percent of hospital beds, put out a statement of its own that there is sufficient bed capacity "and surge plans are in place to continue to serve the people of Arizona.''

Christ also said that there are sufficient doctors and nurses available should the number of COVID-19 patients increase sharply.