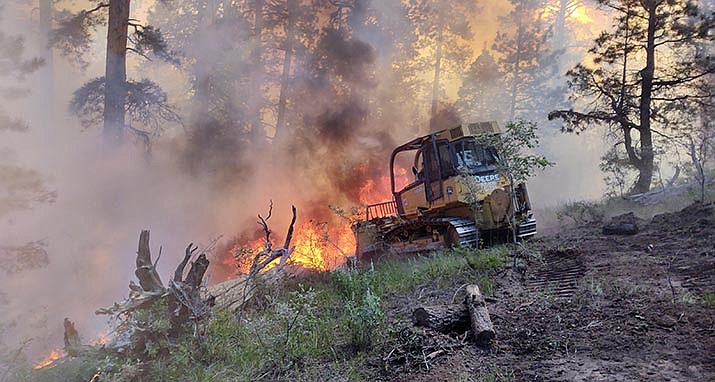 Firefighters worked to save a historic ranger station Friday in the Kaibab National Forest in the battle against the Mangum Fire. That fire is only 4 percent contained and has burned 65,000 acres. The Bush Fire, which has taken out 175,000 acres in the Tonto National Forest, is the largest active fire in the U.S. Courtesy of U.S. Forest Service

There are about seven major wildfires raging around Arizona as of late Tuesday morning.

Fire departments in the Verde Valley have sent assorted personnel to fires — some in distant parts of the state.

The fire of greatest local concern is likely the Mangum Fire, which began on June 8. As of Saturday afternoon, according to inciweb.org, the Mangum Fire had consumed about 65,000,000 acres and was only 4% contained.

The blaze, burning near the Grand Canyon’s North Rim, led to evacuations of the Jacob Lake area and the closure of the North Rim area of Grand Canyon National Park.

"Firefighters focused their efforts on the southern, western and eastern edges of the fire," the entry reads. "Crews work towards containment through successful firing and burnout operations and additional line construction. Northern sections of the fire remained slightly active. Firefighters continued to limit the fire’s spread to the north by securing anchor points and constructing line. BLM’s Winter Road served as a firebreak and was enhanced by utilizing masticators to reduce the fuel load alongside the road, resulting in a wider firebreak."

State Route 89A, north of Flagstaff, is closed from Marble Canyon to Fredonia. Highway 67, from Jacob Lake to the North Rim area, is also closed. The cause is under investigation.

"We attacked directly and fell back and attacked again, too many times to count," a tweet reads. "The fire burned within feet of the Historic Ranger station but through pre-preparation and crews arriving back on scene in the nick of time --saved it."

The Bush Fire, as of Saturday afternoon, was the largest active fire in the U.S. The human-caused Tonto National Forest blaze only began June 12 and has charred about 175,000 acres with only 15 percent containment.

Evacuations have ended for the communities from Jake’s Corner to Tonto Basin.

The Bighorn Fire, which has been going since June 5 north of the Tucson and Casa Grande areas, was started by a lightning strike and is 19% contained after burning 42,000 acres near homes in the Catalina Mountains.

The Bringham Fire has taken out 18,000 acres in the Gila National Forest near the New Mexico state line. It is 18% contained in a fairly remote area.

Also in a remote part of southeastern Arizona is the Blue River Fire. It’s burned 30,000 acres, but the lightning-caused blaze is 85% contained.

Near the Blue River blaze is the Dry Lake Fire. It was also started by lightning and has been held to about 4,200 acres. That fire is 93% contained.

Arizona’s oldest fire, at the moment, is the Sawtooth Fire, which started with a lightning strike on May 30. It has burned about 25,000 acres in the Superstition Mountains, about 40 miles east of Mesa, but is now 100% contained.

There are several other smaller fires burning in national forests that are all 100% contained.