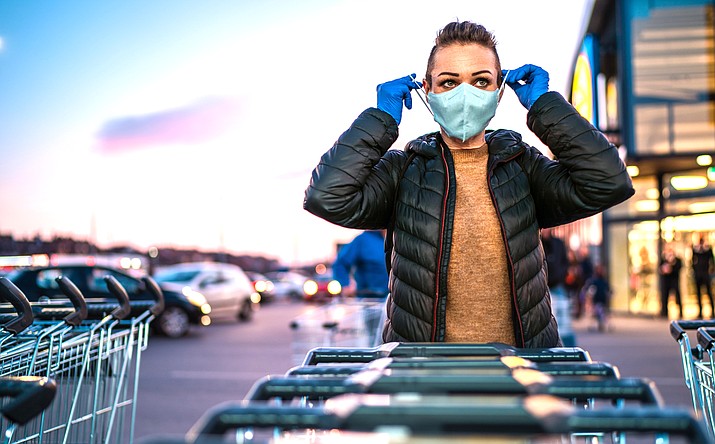 With COVID-19 cases continuing to escalate in the state, Arizona cities and counties are getting the power to require people there to wear masks. Adobe Stock Image

PHOENIX -- Arizona cities and counties are getting the power to require people there to wear masks.

The permission from Gov. Doug Ducey comes less than a week after he specifically rejected the concept of local control on issues of public health. He argued the state needs a standard and uniform policy -- and, in this case, one that does not require masks.

What changed, according to Ducey aides, is the governor received a "very compelling'' letter from officials in the state's four border counties.

"We have all been tirelessly advocating that our residents adhere to the Centers for Disease Control guidelines, including the washing of hands, avoiding close contact, and wearing of face masks around others,'' the officials wrote. And they said that the most significant of those is the use of face masks in public, something the governor has refused to mandate and they cannot require themselves.

"The reality is that since the state relaxed the stay-at-home executive order, many residents have interpreted this to mean that the danger is over,'' they wrote.

But it isn't just the counties that have been pressuring the governor.

The move comes on the heels of what is now more than 900 medical professionals signing a letter to the governor asking him to issue a statewide mandate requiring anyone age 2 and older to wear a mask. They cited the lack of a vaccine or proven treatment, saying that the disease is just as contagious now as it was when he implemented his stay-at-home directive.

"There is sufficient, clear, scientific evidence that wearing masks is one way to decrease the spread of COVID-19 and thus would reduce both the wave of severely affected patients requiring ICU and ventilator resources as well as unnecessary deaths,'' they wrote.

They also sought to appeal to the governor's desire to restart the economy, saying a mask requirement accomplishes a lot without having to reimpose the kinds of restrictions on business and travel that he had before.

"Keeping the economy growing while maintaining universal masking and social distancing is a win-win situation for every member of the community regardless of political views in that it balances economics with public health,'' the letter states.

But not all the messages to Ducey have been so friendly.

Sen, Kyrsten Sinema, who has repeatedly complained about Ducey's policies, is upping her rhetoric, now attacking the governor's statements that his earlier orders were designed to "flatten the curve'' to ensure the state's health care system would not be overwhelmed.

"I don't think it makes sense to design your policy on whether or not there are enough hospital beds for people to die in,'' she told a KTAR radio show.

It also comes as some cities already were looking at going their own way on the issue -- with or without the governor's blessing.

In Tucson, Mayor Regina Romero said she has directed the city attorney to amend the existing local proclamation to require that people wear masks in public -- regardless of what the governor says.

"This is the moment in time where we have to decide,'' she told Capitol Media Services even before the governor's announcement. "Every day we wait means lives.''

And Councilman Steve Kozachik cited a provision of the city charter giving the council "to make all regulations which may be necessary or expedient for the preservation of the health and the suppression of disease,'' saying that exists with or without Ducey's permission.

"What is the same is the science,'' he said. "Science wins. Mother Nature bats last and she's going to say, 'This is a virus and it does what it does.' ''

Ducey's voluntary approach had had its supporters, including Martha McSally, the state's other senator.

"It's up to Arizonans to take care of each other,'' she said in a KTAR interview.

"We've got to do our part,'' McSally said. "We don't sit back and wait for government edicts.''