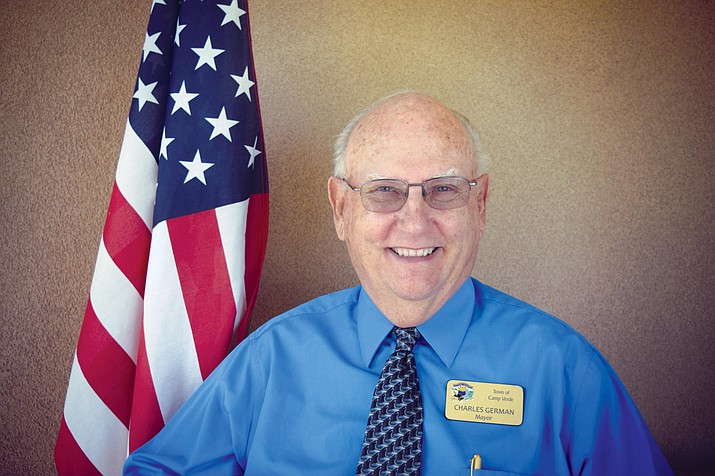 Years in Arizona: More than 72 years

Verde Independent: Why do you want to be Camp Verde’s mayor?

Charlie German: I have been asked by community members to run again this time for the position. I would like to serve this last time to bring pending important issues to the decision time for council and our community.

VI: If you were elected mayor, what do you believe would be your greatest responsibility to the citizens of Camp Verde?

German: Work with council to establish and maintain effective and clear policies for our town. Also to serve them honorably, clearly and with the pathway they have set for the Council and Mayor through the General Plan, Focused Future 2, and Master Recreation Plan for the Verde River.

VI: Where in Camp Verde do you live? Was there a community issue that caused you to seek this office?

German: I live on McCracken Lane next to the sports complex. I was responding to continued asks by community members and leaders to run for the office of mayor.

VI: What do view as the most important issues facing Camp Verde and how would you deal with those concerns?

German: There are a number which are inter-related: water/Verde River; growth in the town and Verde Valley; ownership of a municipal water company; continuing strengthening the relationship with down-stream water users and up-stream water users and developing common solutions to limited water resources; and of course the local issues of providing services, recreational and cultural opportunities for our citizens.

VI: Are you pleased with how Camp Verde’s government has handled the COVID-19 restrictions/closures? Would you have done anything differently?

German: Yes, very pleased with the citizens and businesses on how they have handled the restrictions and their compliance with the guidelines. It would have been very helpful to have a clear indication as to how and where the vast majority of our citizens receive their local information. We were kept very busy trying to keep the community, including businesses with accurate and timely information through various platforms. Staff is currently making adjustments to procedures as we proceed in order to more efficiently deal with similar future situations and needs. A council future review for possible policy adjustments.

VI: Should the town continue to offer Zoom attendance of its council meetings after the pandemic has eased?

German: Obviously we have entered a new world of technology and the need for information. While municipalities and organizations are shifting their policies, procedures and funding equipment to deal with the continuance of governance, careful consideration should be given to the use of that equipment and methodology and as to whether it should be used regularly or in emergencies only. Certain to be a continued topic and discussion by council.

VI: Town Manager Russ Martin has said that the public’s attendance at the Zoom meetings has been sparse. What do you think could be done to encourage better public participation? Or do you believe that the public would rather be in council chambers for council meetings?

German: It is my belief that as the community becomes more aware of the opportunity to attend by electronic means, they will increase their participation. There has always been sparse attendance unless there is a major community issue, or one dealing with a specific group. Historically, Camp Verde is quiet when things are viewed as being done appropriately and things are good, and there is confidence in their elected officials.

German: Absolutely purchase one. Camp Verde has no water portfolio in which to bank water it rightfully has as a landowner. Pursue purchase of the company which is for sale. Council committed to undertaking the study necessary for the purchase of Camp Verde Water Company to determine its inventory and condition. My position: it is essential to the town’s future to own a water company and which council is pursuing. Should the town make a purchase, remember it then would operate on the actual costs to users and not with a for-profit margin under a private ownership.

German: Transparency is demonstrated through the public discussion by elected officials of topics of policy which will affect those being governed. It is recognized there is a need for confidentiality during negotiation discussions, however, the vote by council must follow the agenda process and made in the public view. Staff functions to serve the community through giving information accurately and legally allowed by direction of the manager, policy, procedures and as allowed by law. Once documents become public they are available to the citizens by request.

VI: Do you agree with how the Camp Verde Marshal’s Office handled the Joe Butner/Bruce George incident?

German: It would appear it was the first time for current personnel to receive such a request from a citizen who also served as a council member. However, the CVMO released information as required by current law governing a public records request. The town has recently received a Notification of Claim regarding this matter, therefore it would be inappropriate to make further comment.

VI: With a plan to inspire and facilitate transparency, Marshal Corey Rowley created a citizens’ committee that meets twice each month. Do you feel the committee has effectively become a liaison between the general public and local law enforcement? Should other town departments create similar committees with which to liaise?

German: I would leave that to Marshal Rowley to evaluate and report as to whether it has met his expectations and its effectiveness. As for other town departments, it appears policy would allow for that to occur; especially should it be requested and/or upon recommendation of a department head.

VI: Please explain how you see the council/manager form of government. How much latitude should council give the town manager to lead the town?

German: This operating governing structure is: Council makes policy and the manager executes those policies with his staff. Utilizing the highest ethical and professional standards of conduct and practices should be council’s goal to serve. The clearer the policies set by council with legal consultation and with the manager makes for good policy. Policy development considering possible benefits and/or unintended consequences with the intent to serve the public better through public postings, discussions and vote by council provides greater understanding by council, the manager and the public. The manager’s latitude is established by council’s policy and its public direction.

VI: How important do you think it is for council to work together and not work rogue, or independent of the process. Or, does the public rely on council members to work rogue if necessary?

German: Council must work as a team; bringing greater confidence and credibility for the town. Common decency and conduct regarding sensitive information must be discretely handled so appropriate planning and management is possible. Concerns about unintended consequences could be mitigated through scheduling legal consultation concerning any revelation of sensitive information. Rogue actions of revealing any additional information during a council meeting negates opportunity to properly plan for possible unintended consequences and leaves critical staff and remaining council members caught by surprise and eliminates any opportunity to consider the risks of litigation or other actions. Policy governing the whole council should prevail.