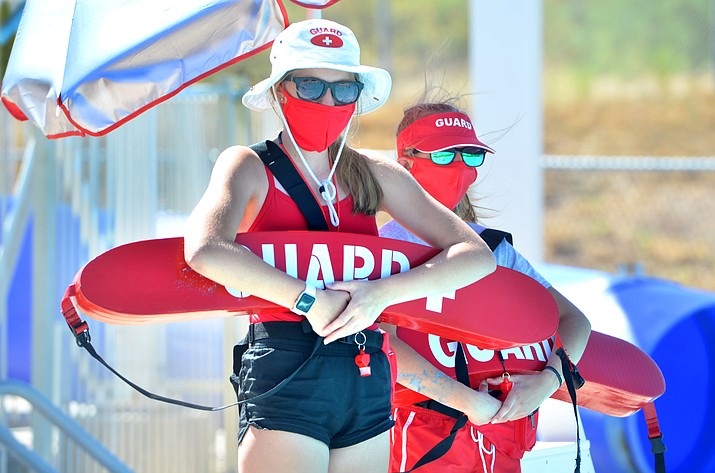 Lifeguards Megan Palmer, left, and Delainey Kesler and visitors will be required to wear masks at the Camp Verde pool when not in the water. VVN/Vyto Starinskas

CAMP VERDE -- The Camp Verde and Sedona city swimming pools have opened for summer fun in the Verde Valley. The City of Cottonwood is waiting until Friday to decide when to open its outdoor pool.

Lifeguards, as well as any visitors to the Camp Verde swimming pool, will be required to wear a face mask because of the coronavirus emergency, according to Michael Marshall, manager of the Camp Verde Parks and Recreation Department. The Camp Verde pool opened last Saturday.

However, the concession stand will be closed, there will be no swimming lessons this year and less staff, Marshall said.

Verde Valley kids should count themselves lucky since the City of Phoenix announced they have closed all public pools and splash-pads for summer 2020 due to the coronavirus crisis.

To allow for more room at the Camp Verde pool, only 30 people will be let in during two-hour block periods. Normally, the pool capacity is 88 people.

One restriction that will make children unhappy is the temporary closure of the popular slide at the pool. Marshall said they would revisit opening some things such as the slide or the concession stand.

They are following state and CDC guidelines. Coronavirus does not spread in chlorinated water, Marshall said. However, it can spread between people standing above the water in the pool, so everybody will be kept socially distant while swimming, he pointed out.

The Camp Verde pool will be open in two-hour blocks, six days a week, he said. It will be closed every Friday this summer for cleaning and will be cleaned in between each block of swimmers, Marshall said.

They will also be sanitizing all the handrails, bathrooms and all the other areas of the pool thoroughly, he said.

The Sedona Community Pool opened on June 8 for adult lap swim and aqua fitness classes. Monday, the city included recreation swimming throughout the week and StarBabies/StarTots on Saturdays, according to a city press release.

“We will have a number of activities including rec swim, lap swim, aqua fitness, and StarBabies/StarTots classes. We are taking a number of precautions though, following the Governor and the CDD’s guidelines to opening pools,” explained Lauren Browne City of Sedona Communications and Public Relations Manager Wednesday.

This includes a total of up to 50 total guests during rec swim, she said.

There will be a strict sanitation schedule, encouraging the use of masks when not in the water, pre-screening and temperature checks, and encouragement of physical distancing, Browne said.

“All guests should register, secure their time slot for their desired activity, and pay ahead of time,” she added.

Being outdoors helps with physical distancing and the chlorine kills the virus, explained Sedona Parks and Recreation Manager Steve Richardson. They have canceled Fourth of July WetFest and will not host special events at the pool this season, he said.

“The measures we’ve implemented based on the governor and CDC’s guidelines will also help keep swimmers and staff safe,” Richardson said.

Jack Teel, Parks and Recreation Superintendent City of Cottonwood, said on Wednesday that the city would probably have more answers on the pool on Friday.