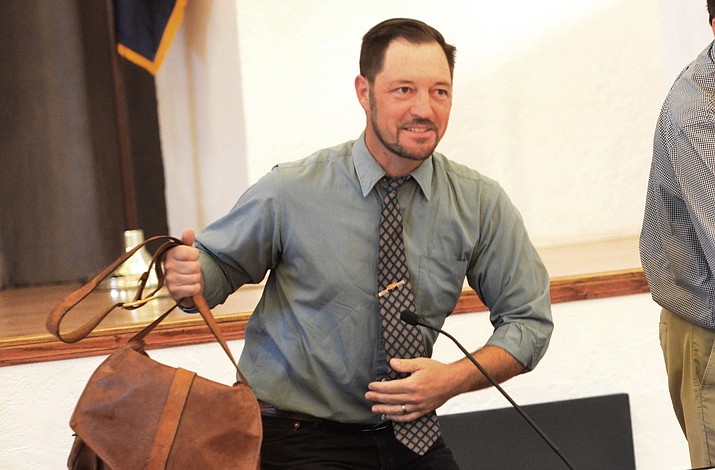 Following a 4-3 vote Friday against an emergency order requiring face masks in Cottonwood, Mayor Tim Elinski said he will still go forward with a mayoral proclamation to implement a face-mask requirement in the city. VVN/Vyto Starinskas

COTTONWOOD - After a 4-3 Cottonwood City Council vote against an emergency order Friday, Cottonwood Mayor Tim Elinski told those in attendance he would still issue a proclamation required face masks in public.

The proclamation was read aloud by Elinski at the meeting. It includes an exception to face coverings for those consuming food or beverages or for those who have medical reasons for not wearing a mask.

Immediately following the vote at the end of the 1.5-hour meeting, Elinski announced he would implement a face covering requirement by mayoral proclamation.

“So, then, this was a waste of time,” Henry said after Elinski said he overrule the majority vote of the council.

Mathews said he will not participate in any council meetings until Elinski rescinds the proclamation.

The council’s next regular meeting is Tuesday, July 7.

“I really thought the council would approve the order,” Elinski told the Verde Independent after the meeting. “We’ve seen a huge spike in cases, though not here in Cottonwood. We should be willing to do whatever it takes to keep it that way.”

Elinski’s announcement came at the end of a meeting that included emotional public input. Both the U.S. and Arizona constitutions were mentioned by those opposed to a face-covering requirement. In all, about a dozen people shared their views with the city council.

The Sedona City Council will take up face coverings as part of its Tuesday, June 23 meeting, set for 4:30 p.m. in the Council Chamber.

Yavapai County, along with all municipalities in the Prescott area, have decided to not require face coverings. Camp Verde Town Manager Russ Martin said the Town Council could take it up at its first July meeting. Jerome Town Manager Candace Gallagher was unavailable for comment.