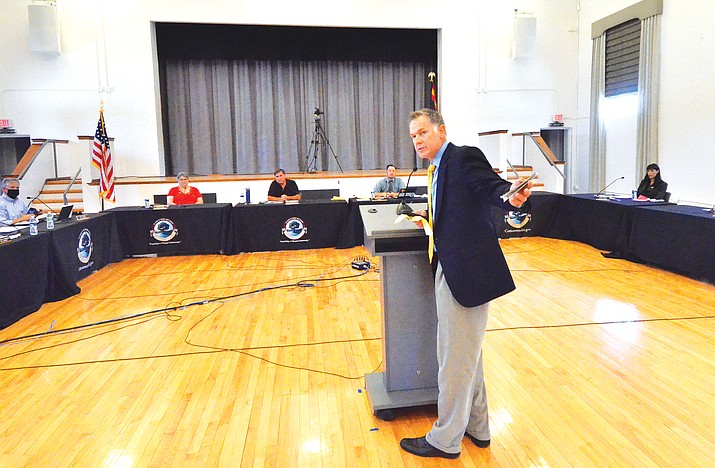 Please visit verdenews.com for daily updates on the spread of COVID-19 in Arizona, Yavapai County and the Verde Valley.

About 90 minutes later, Mayor Tim Elinski told those in attendance he would issue a 30-day proclamation requiring face masks in public places despite the City Council having just voted, 4-3, against issuing an emergency citywide order to help prevent the spread of the COVID-19 virus.

So why did Elinski bring the controversial order to the council, calling an emergency weekday meeting and allowing the six councilmembers to heavily contemplate their vote at the Cottonwood Community Clubhouse? Why not simply issue the proclamation without consulting council, which was within his authority as mayor?

“I really thought the council would approve the order,” Elinski told the Verde Independent after the meeting. “We’ve seen a huge spike in cases, though not here in Cottonwood. We should be willing to do whatever it takes to keep it that way.”

Elinski said he just completed an interview this week with a magazine about how Cottonwood is open for business and is welcoming and encouraging the tourism that has breathed new life into its economy over the past decade. He said between Gov. Doug Ducey’s re-opening of the full economy, the natural travel that takes place during the summer months and the need for the city’s businesses to survive, Cottonwood must promote himself — and take extreme measures to stay safe in the process.

“If history proves me wrong, then I will graciously apologize,” Elinski said. “But with asymptomatic transmission, numbers fluctuating here and in parts of the state near us, I mean, we all are looking at some of the same evidence.”

Elinski points out that medical experts, while sometimes changing suddenly on best practices, have been largely correct in predicting the spread of COVID-19.

“Looking back to January, the medical community has been mostly right in its predictions,” he said. “It’s the politicians that have consistently gotten things wrong. I don’t want to be one of those.”

During the meeting, Elinski was among many who described very personal reasons for his position on the requirement.

“My father-in-law had a fall last year, and has been in a facility all through this year,” Elinski said. “His only communication with his wife has been when she comes to the window and gets him to pick up and operate a cell phone. I want my daughter to have some more years getting to know her grandfather, and if I can wear a mask or wash my hands and social distance to get there, I’m all for it.”

Hulse was initially concerned the Cottonwood Police Department and dispatch center would be taxed even more by having to enforce a mask requirement. However, Corbin made it clear the city’s code enforcement division will handle the requirement, and a special hotline can be set up to handle phone calls about COVID-19 protocol compliance.

“We want to be as light-handed about this as we can be,” Corbin said.

Several of the public-input speakers said they believe the requirement violates freedoms protected by the U.S. or Arizona constitution, or both.

The first person to speak, Syndie Loll, said requiring face coverings violates everything America is supposed to be about.

“If someone would have told me, six months ago, that I would be up here asking elected officials to protect my God-given right to breathe fresh air everywhere I go, I would have told you that you were crazy,” Loll said.

One speaker, Scott Murray, a former sheriff’s deputy, said he believes the concerns generated by the government about COVID-19 are money-motivated.

Rose Sperry said she remembers when tuberculosis and polio were of grave concern, before medical science minimized the impact of each, and she is still thriving, not wanting the government to tell her what she must wear.

Brad Ramer said numbers, which include 1,300 deaths of COVID-19 in Arizona, but only seven in Yavapai County, indicate there is no need for severe response.

“That doesn’t sound like a pandemic to me,” Ramer said. “I’m not a retarded person or a crazy person …. You’re breaking all of our constitutional rights if you pass this law. Read It. Learn it. Live it.”

A few people spoke via GoToMeeting.com – some in favor of the requirement. Dr. Leon Pontikes, chief medical officer for Verde Valley Medical Center and Northern Arizona Healthcare, spoke at length by phone.

Hulse said he doesn’t see how masks could be unconstitutional, but Mathews disagreed, and said wearing face coverings is an important lesson in personal responsibility.

Mathews said he will not participate in any council meetings until Elinski rescinds the proclamation; the council’s next regular meeting is Tuesday, July 7.

The proposed emergency order was read aloud by the mayor at the meeting. It includes an exception to face coverings for those consuming food or beverages or for those who have medical reasons for not wearing a mask.

Henry, after Elinski said he would overrule the majority vote of the council, said Friday’s meeting was a waste of time. Earlier, she said a face-covering requirement is useless without more comprehensive encouragement of practices such as handwashing, distancing and disinfecting.

Henry, who actively solicited community input this week, said there are many concerns about how various businesses and other places, such as schools, would be able to comply with a face-covering requirement.

Wilden said she had a five-day hospitalization this week. Though she doesn’t have COVID-19, she said three doctors all told her they believe Cottonwood is a hot spot where the virus could spread quickly.

The Sedona City Council will take up face coverings as part of its Tuesday, June 23 meeting, set for 4:30 p.m. in the Council Chamber.

Yavapai County, along with all municipalities in the Prescott area, have decided to not require face coverings. Camp Verde Town Manager Russ Martin said the Town Council could take it up at its first July meeting.