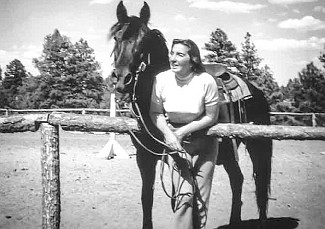 Betty Jean Dickinson Kent was born in Flagstaff, Arizona to Walter and Opal Dickinson on July 17, 1924. The Dickinson family arrived at Beaver Head in the Verde Valley, Arizona Territory in August of 1875. Thus, Betty Jean grew up and matured with the State where the now common place names were names of people, family, friends and relatives.

At Flagstaff’s first Annual Business, Industrial and Automobile Explosion, she was voted the most popular baby in Flagstaff, winning a dozen photos from Carson’s studio. Her early memories were of Sunnyside Farm, now Sunnyside or East Flag. When it was time for school, she moved to her grandfather’s Pine Hotel to begin schooling at Emerson School. The Pine Hotel was directly across the Highway 66 from the Santa Fe Train Depot.

From the lobby of the hotel she saw Tom Mix’s train come in and she and her mother walked across the highway to get a closer look at her movie star hero. She fondly remembered crossing Santa Fe Avenue (Hwy 66) to sled down the railroad freight ramp and attending parties at the Riordan house in the winters of these troubled times.


The depression, with its economic instabilities came family problems. Her parents divorced, and she was split by the Court between them. In this time, she was a “made-up dancing Indian girl” on the Babbitt’s float in the last “Days of 49” Parade. Later in life she would discover her native American ancestry and become fiercely proud of it.

The next year the first Pow Wow celebration would occur, and those Indian dances and rodeo have now gone the way of the “Days of 49”. When her mother remarried, she moved to the Verde Valley with her mother.

She attended school in Camp Verde, Clemenceau Public School and graduated high school at the old Clarkdale High School. During high school, she worked as a waitress at the Twins’ Café. The Twins had been Harvey Girls and schooled her in the Fred Harvey service method. She found this training valuable for weathering later tough economic times by providing additional family income by waitressing.

Her life love of horses began in childhood, but got her first horse, Cotton, through earning money by babysitting and waiting tables. After graduating from high school, she worked for the Clarkdale School System until finding a better job at the Phelps Dodge smelter in Clarkdale.

In 1943, she married Walter Kent, in Mildred Fain’s home on Park Avenue, Prescott with Mrs.’s Johnie Fain and Betty Cole in witness. Her only extended period of absence from Arizona was the two years that she lived in San Diego while Walter was in the Navy. After the war, they sold the W Dart Ranch cattle to Norman Fain and bought the slaughterhouse in Jerome. The slaughterhouse business went the way of many of the other Verde Valley businesses with the decline and eventually end of copper mining in the valley. The United Verde Coper Company closed in January 1953.


In that year, Betty was working as journalist for the Verde Independent Newspaper then owned by Bill and Fran Wright. On a slow news day, Betty, Joe Laiten, acting editor, and the head ranger from Tuzigoot created a front-page story, perhaps the first story, declaring Jerome a ghost town. Joe and the Ranger painted a sign showing Jerome’s population decline from 15,000 to GHOST CITY.

A photograph of the sign was featured in the story, and subsequently the story was carried by newspapers as far away as New York city. Some folks in Jerome were not pleased at the time for Jerome to be called a ghost town and let the editor know.

In the sagging Verde Valley economy of the middle 1950’s, Walter and Betty moved with their four children to the Flagstaff area, where they operated several farms. First in Doney Park at the Copeland Place, then at Sheriff Kester’s farm, one at Fort Valley, and finally back to Koch Field in Doney Park.


While Walter farmed, Betty was a waitress, a farmer, a secretary, an employment agency owner, a mother, and still found time to become the founding chairman and first president of the Northern Arizona Horseman’s Association, form the San Francisco Peaks Riding and Hunt Club, and create a NAU horsemanship class. She taught horsemanship at NAU for nine years. Age and declining health prompted a move from Flagstaff in 1975 to a hill above McGuireville not far south of the place that the Dickinson family spent their first night in the Verde Valley one hundred years earlier.

On the hill, she developed a small homestead with garden, goats, chickens and horses. As usual tending the garden wasn’t enough, she taught cooking, arts and crafts, and horsemanship at Yavapai College, participated in the Camp Verde Historical Society, and served for a period as the director of that Society.

She was chosen as one of the 14 honorees of for the first “Women Who Make a Difference” Hall of Fame by the American Association of Women in Community Colleges. The homesteading ended in when a horse knocked her down breaking her leg. After recovering her strength, she applied for and was granted entry to the Arizona Pioneer Home.

Horses and writing were her two loves in life. At the Home, without her horses, she started a writing group. She and one of her students sold books that they had written. She continued her knitting, crocheting and tatting, and created award winning pieces, as well as two stunning, six-foot diameter, lace table cloths as wedding presents for her grandsons.

A few short paragraphs cannot capture the breadth and depth of Betty’s life or Arizona’s history into which it was woven. Both Betty and Arizona have seen the changes from the richness of farming, copper, cattle and timber to tourism, recreation and retirement.


Betty’s story ended peacefully at the Arizona Pioneer Home on June 3, 2020 and her final resting place will be with family in the Dickinson part of the Flagstaff, Cemetery. With her passing, we all have lost a real Arizona pioneer with a first-person knowledge of our history.

Betty Jean was predeceased by Walter Kent, her husband of 73 years, in 2006. She is survived by her children, Sherry Lee Kent Devilier, W. Norman Kent (Charlu Kent), Charles Kent and Daniel Kent. She has a grandchild, Travis Kent, who she raised as her own, five additional grandchildren and six great-grandchildren.


Due to the Covid19 pandemic, memorial service is postponed until a later date. Arrangements entrusted to Ruffner-Wakelin Funeral Homes and Crematory of Prescott, Arizona.