Protestors, vice mayor at rally
Recall of mayor part of motivation, one day after mask requirement 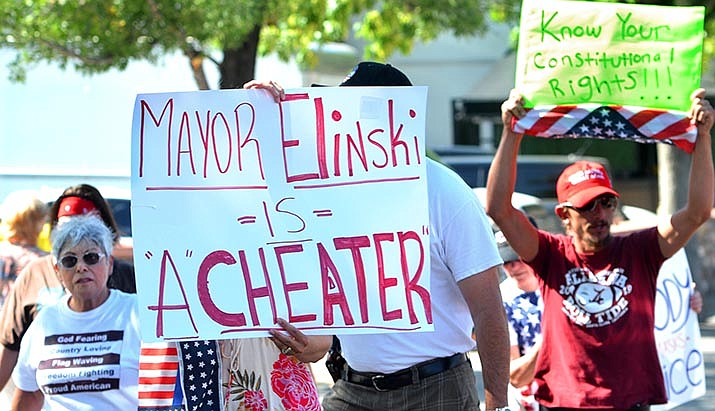 COTTONWOOD – One day after the Cottonwood mayor issued a proclamation require face coverings, protestors took to the streets of Old Town to express their anger.

About 50 total protestors gathered along North Main Street, in front of and near City Hall, Saturday afternoon to voice displeasure with Cottonwood Mayor Tim Elinski. After a 4-3 Cottonwood City Council vote against an emergency order Friday, Elinski told those in attendance at a special meeting that he’d be issuing a proclamation required face coverings in public.

The 30-day order, which went into effect Friday afternoon, requires face coverings in places where social distancing cannot be practiced. This includes most indoor spaces, except if consuming food or drink, and there is an exception for physical and mental diagnoses that make covering the face ill-advised.

Many of those shouting or carrying signs said Elinski’s proclamation violates constitutional rights.

Mathews, Henry and Nairn all seemed angry at Elinski for calling a meeting, calling it to a vote and then superseding the defeat of the emergency order with his own proclamation.

Elinski is unopposed in seeking re-election in his Aug. 4 bid to seek a second four-year term.

Mathews was at Saturday’s informal rally, though he didn’t carry a sign nor did he appear to be yelling. He said he was asked to be there by some residents who attended, but didn’t say which ones, and said he wasn’t there to play a particular role.

“I’m not paying attention to any slogans,” Mathews said. “And I’m not reading any of the signs.”

The group split into smaller marching units, at times, in order to march along the Main Street sidewalks and other streets in Old Town. Regarding masks, the protestors seemed evenly split about those they encountered wearing masks. Some yelled, “Take them off.” Others yelled, “It is your choice.”

None of the people approached by the Verde Independent at the rally would speak with a reporter and give their names. Several said they would not speak with anyone wearing a mask.