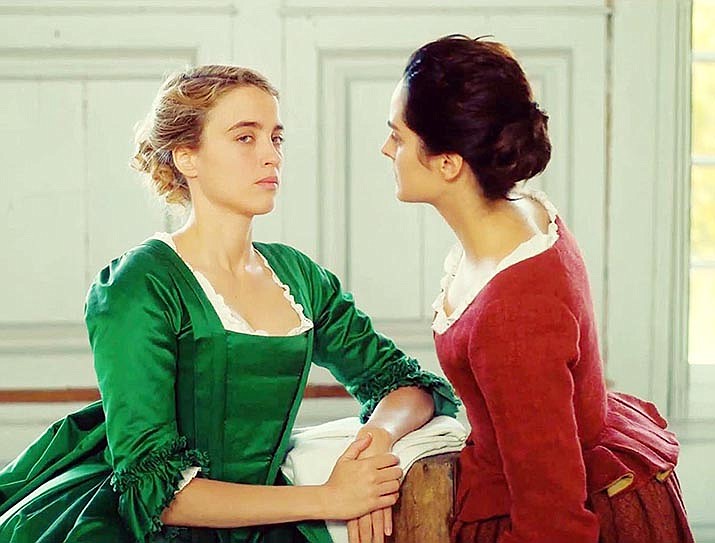 Adèle Haenel and Noémie Merlant star in "Portrait of a Lady on Fire," which is now available through streaming services.

Here are some newly released movies available on DVD or streaming services.

Portrait of a Lady on Fire

On the island of Britany, France in the late 18th century, occurs a forbidden fling between aristocrat Heloise and painter Marianne. Commissioned to do Heloise’s wedding portrait, Marianne must study her model by day so she can paint the portrait at night due to Heloise’s refusal to pose for portraits because of her reluctance to marry. The two women grow closer and gain attraction to one another as they share Heloise’s first and last moments of freedom.

After completing the painting, Marianne confesses what she’s up to and destroys her work. Their bond is stronger than Heloise’s distaste for a self-portrait, and Marianne is able to freely paint a new one. Heloise’s new portrait is a test of love.

Rated R for some nudity and sexuality.

Two Roman legions have been brought to a stand still in the snowy mountains of Armenia, and the men are dying slowly in the cold. The rest of the Roman army is in Syria, only two weeks march away but the mountains swarm with Parthian patrols. Noreno, a half-Roman, is entrusted the mission of crossing the mountains to ask for help. However, he might not be the best option, he’s an expert runner, but he despises Rome.

Rated R for some violence and language.

“Corpus Christi” is the story of a 20-year-old Daniel who experiences a spiritual transformation in a Youth Detention Center.

The crime he commits prevents him from applying to the seminary and after his release on parole he is sent to work at a carpenter’s workshop.

However Daniel has no intention of giving up his dream and dressed as a priest he decides to - minister a small-town parish.

A patriarch of a wealthy and powerful family suddenly passes away, leaving his wife and daughter with a shocking secret inheritance that threatens to unravel and destroy their lives.