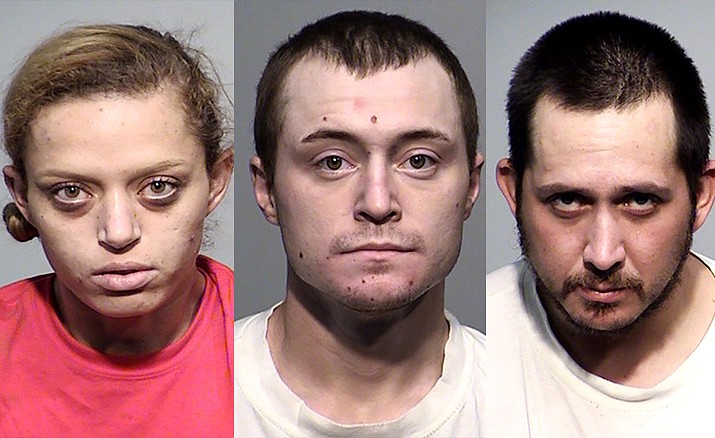 From the left, Areanna Newhall, 23, Alec Ramsey, 24, and Jimmie Treakle. 33, all of Cottonwood, were arrested Monday at a motorhome parked on property in the 2400 block of South Cedar Lane in Cottonwood. There were a total of 259 fentanyl pills found in the motorhome. Courtesy of Yavapai Sheriff’s Office

COTTONWOOD — Two men and a woman were booked into the Camp Verde Detention Center this week, and 259 fentanyl pills were seized, as the result of a Partners Against Narcotics Trafficking task force investigation, according to a news release from the Yavapai County Sheriff’s Office.

A Partners Against Narcotics Trafficking task force investigation led detectives to a motorhome parked on a South Cedar Lane property in Cottonwood. Three arrests were made at the motorhome Monday, and a total of 259 fentanyl pills were confiscated. Courtesy of Yavapai Sheriff’s Office

In mid-May, according to the release, detectives developed information regarding the sale of fentanyl pills, based partly on a high volume of traffic at the motorhome. Detectives verified this high volume of traffic, and over the next few weeks, the investigation continued, and specific individuals were identified who were involved in the drug sales.

Detectives sought and obtained a search warrant for the motorhome and served it at about 8:30 p.m. Monday.

Newhall, according to the release, was seen with her hands inside her waistband. A subsequent search revealed a plastic bag containing 259 fentanyl pills.

Ramsey was detained and found with a quantity of methamphetamine in his possession. Treakle was also detained.

Detectives found additional fentanyl pills and some methamphetamine, along with associated paraphernalia, throughout the motorhome.

Newhall acknowledged ongoing sales of fentanyl over the last couple of months, with Ramsey. Pills were purchased in the Phoenix area. She allegedly used her unemployment benefits and money provided by Ramsey to make those purchases.

Treakle told police he was only visiting the pair and had used fentanyl while inside the motorhome.

Newhall and Ramsey remained in jail as of Wednesday morning. Newhall is held on a $10,000 bond and Ramsey on$5,000.