Bighorn Fire is only 33 percent contained
Bush Fire has charred more than 170,000 acres 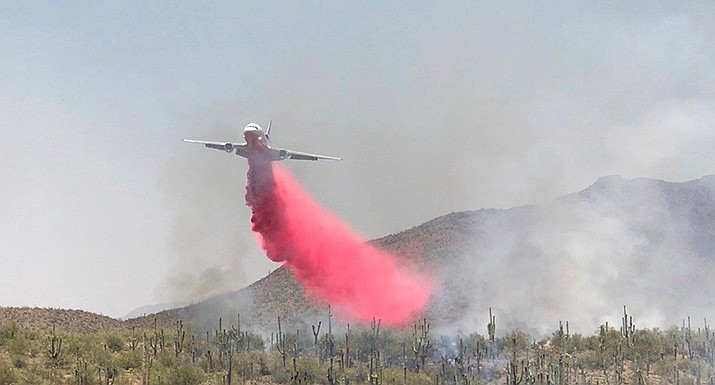 A plane drops chemicals on the Central Fire this week. There are several fires burning large acreage in Arizona now, with the Bighorn Fire being only 33 percent contained and close to Tucson-area structures. Courtesy of U.S. Forest Service

Fire departments in the Verde Valley have sent assorted personnel to fires — some in distant parts of the state.

The Bighorn Fire, which has been going since June 5 north of the Tucson and Casa Grande areas, was started by a lightning strike and is 33% contained after burning 75,000 acres near homes in the Catalina Mountains.

There are more than 1,000 firefighters assigned to the blaze.

About six other communities are on either the “ready” or “set” lists.

The Bush Fire, as of early this week, was the largest active fire in the U.S. at 187,000 acres, but it’s also 86% contained. The human-caused Tonto National Forest blaze was ignited June 12.

Evacuations have ended for the communities from Jake’s Corner to Tonto Basin. Tonto National Monument has reopened.

There are still more than 400 firefighters working the fire.

The Central Fire is the large blaze burning closest to an interstate highway in Arizona. The 4,500-acre blaze is burning east of New River in the Tonto National Forest, east of I-17. It’s 69% contained and 135 firefighters are assigned to it.

The Bringham Fire has taken out 22,000 acres in the Gila National Forest near the New Mexico state line and is 37% contained. Its smoke is a concern for the Gila in both Arizona and New Mexico.

The Aquila Fire is also burning along an area close to I-17, though it is less than 1,000 acres and is 50% contained.

The Mangum Fire had consumed about 70,000 acres and is 68% contained. The blaze, burning near the Grand Canyon’s North Rim, led to evacuations of the Jacob Lake area and the closure of the North Rim area of Grand Canyon National Park, as well as other places and roads in or near Kaibab National Forest, off of State Route 89A.

There are several other smaller fires burning in national forests that are at or near 100% contained.

Check the online map found at inciweb.nwcg.gov for the latest road closures and other information.