Ducey: 'This is Arizona's first wave' 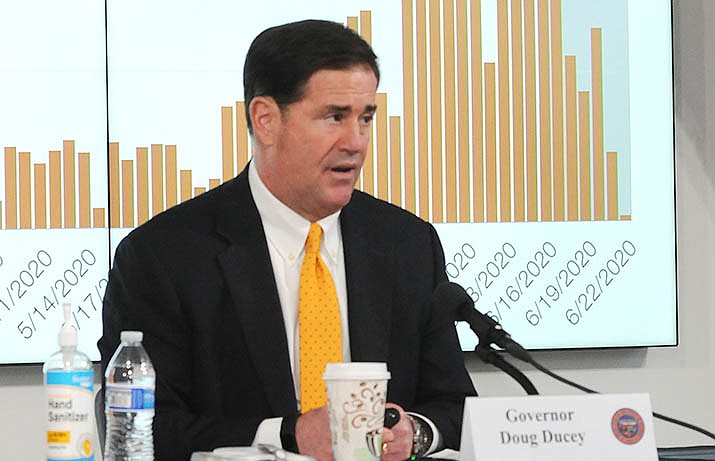 Gov. Doug Ducey discusses Thursday the increasing number of Arizonans infected with COVID-19 and how the only way to turn that around is more people staying home and wearing face masks. (Capitol Media Services photo by Howard Fischer)

PHOENIX - Gov. Doug Ducey is defending indoor political rallies with thousands of people without masks even as he admitted the only way Arizona will stop the upward trend of infections is if people mask up and stay home.

"People's rights to assemble are not going to be infringed," the governor said Thursday when asked about his attendance at a Trump rally earlier this week at a packed north Phoenix church with about 3,000 people, the majority of who did not have face coverings. And Ducey is expected to attend two events this coming week with Vice President Pence, one in Tucson that has been billed as a campaign stop.

Ducey also brushed aside questions about how requiring people to wear masks -- which is now the law in Phoenix -- interferes with their right to assemble.

"It's in the First Amendment," he said.

At the same time, however, the governor announced the state Department of Liquor Licenses and Control had sent notices to eight Scottsdale bars which he said were not complying with the new "guidance'' he issued last week to ensure protection of employees and patrons. That agency is empowered to take away the right of any of these establishments to serve alcohol.

"The crowded social gatherings that we've seen must be minimized,'' he said.

All this is occurring as Ducey announced that the rate of COVID-19 infection in Arizona will continue to rise.

"I don't want there to be illusion or sugar-coated expectations,'' he said. "We expect that our numbers will be worse next week and the week following, in terms of cases and hospitalizations."

Health officials reported a record 2,453 people hospitalized with COVID-19, with 611 in intensive-care beds, just shy of the record of 614 set a few deays earlier.

And hospitals are now using 85 percent of their beds for all kinds of patients and 88 percent of ICU beds.

Finally, more than one out of every five tests for the virus is coming back positive.

What eventually will turn that around, Ducey said, is the fact that he agreed a week ago to allow cities and counties to impose face mask requirements.

He has refused to do this on a statewide basis. But the governor said the fact that 75 percent of the state now is under such a local mandate should finally result in the state turning the corner -- for the moment.

"What we're going to deal with now over the next 30 or 40 days, I believe will slow the spread of this virus,'' the governor said.

Ducey, who dissolved his stay-at-home order in the middle of last month after six weeks, said he is not prepared to reinstate it.

But the governor did say that, mandate or not, people should stay at home when they don't need to be out.

"Get something to eat,'' Ducey continued. "And go home.''

"You are safer at home with your household contacts,'' she said. And Christ said there are things people need to consider if and when they do go out.

"Indoor spaces are riskier than being outdoors,'' she said. And the more people there are, Christ said, the greater the risk of infection.

But the governor said none of that convinces him that gatherings should be restricted -- or that those in attendance should be required to wear personal protective equipment.

"In terms of the rights of people to peacefully assemble, those rights are not going to be infringed,'' Ducey said.

"It is an election year in the United States,'' he said. "And people's constitutional rights will be protected.''

Instead, he said, it's up to those who go to protect themselves, just as he is now doing.

"Wearing a mask is a huge part of avoiding contracting this virus,'' Ducey said.

"Also physically distancing from people,'' he continued. "And I'm going to continue to do that going forward.''

Ducey also defended the travel plans by both Trump and Pence.

Anyway, the governor said, both are focused on places like Arizona and "states that are having issues to address that in its turn.''

Pence is going to Yuma this coming week to meet with Ducey to discuss the state's response to COVID-19. And the vice president's planned visit to Tucson is billed as part of his "Faith in America'' tour and not as official business.