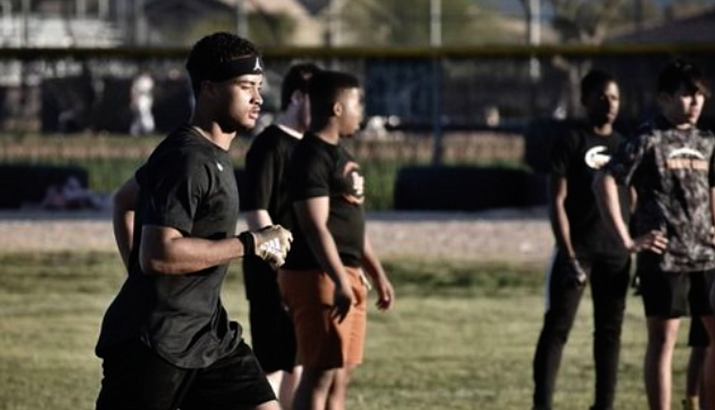 Add in a deadly global pandemic and continued participation in a dangerous full-contact sport, and the decision becomes harder. Yet nearly 1,300 class of 2021 high school football prospects have already committed to Division I universities according to 247Sports, a number that grows by the day.

That total includes at least 18 prospects from the state of Arizona.

“I kind of put it together that I wasn’t gonna be able to take many visits because of the whole quarantine going on,” said three-star offensive lineman Brock Dieu of Casteel High in Queen Creek, who committed to Washington State. “So I knew that all I had to do is do my research and, you know, get on a whole bunch of Zoom calls and FaceTimes with coaches.”

Ohio State and Tennessee have been among the most active schools nationally in taking commitments during the quarantine dead period.

Within the state, Arizona State and Arizona have received all of their 2021 commitments, 15 in total, during the COVID-19 pandemic. But not one of them hails from an Arizona high school.

Arizona prospects have instead committed elsewhere during the quarantine.

Among them is Steven Ortiz Jr., a four-star cornerback from Desert Edge in Goodyear. Ortiz committed to Minnesota despite never setting foot on its campus. He got to know the program via Zoom calls with the coaching staff and other virtual measures and connected with them despite being unable to interact face-to-face.

“The coaching staff has been in my DMs every day,” Ortiz Jr. said. “And I think you have to go to a school where you and the coaches have a really good bond because as soon as you leave home, you need another family to stay at.”

“He loved it (there). And we’re going to go to the Michigan game together so he can go back and see his roots and talk to all his friends and all that,” Ortiz Jr. said. “So he loves it a lot and he’s glad I made this decision.”

Minnesota will take on Michigan Oct. 17 with Ortiz Jr. in attendance if all goes according to plan. Until then, Ortiz Jr. hopes to get up to campus before the season’s start.

Dieu is another player who has never seen the school he committed to in person. Realizing he wouldn’t be able to visit programs he was interested in anytime soon, Dieu focused on fact-finding from home, which included talking to coaches from different schools.

“It’s that small town, college football kind of feel that I’d kind of been looking for,” Dieu said.

After finding what he was looking for, Dieu committed sight unseen to Washington State on May 13.

Chandler head coach Rick Garretson has seen his players garner numerous scholarship offers during the pandemic recruiting dead period. But even though college coaches cannot evaluate prospects in person the way they normally would during the spring, he doesn’t necessarily see that as a downside.

“What people are looking at is their film,” Garretson said, “not their ability to run a pro agility drill or some combine thing. They’re actually watching them play football and they’re making their decisions based off those evaluations from their game films.”

Spring live evaluations often consist of college coaches testing a player’s athleticism by running them through combine-style drills. Although drills help coaches better understand a prospect’s athleticism, Garretson noted that film showcases a player in a game environment and serves as their true “work and their resume.”

“Recruiting is not a perfect science by any means, and, you know, last time I checked, I want to know how they play football,” he said. “Not how they look out in shorts, and running through a bunch of hoops and whistles. And ultimately, that’s who you are and that’s what you are … That’s what sells you.”

Four-star pro-style quarterback Kai Millner of Higley in Gilbert visited the University of California-Berkeley shortly before the state of California instituted a stay-at-home order to prevent further spread of COVID-19. That visit was instrumental in his decision to ultimately commit, as well as the relationship he built with new offensive coordinator Bill Musgrave.

Millner said the success of the visit and his “gut feel” helped him decide on/make his choice to commit to Cal.

“I felt like I really didn’t need to go see all the other schools,” he said. “I felt like Cal was the perfect fit and absolute best option, so I went ahead and made that commitment.”

The NCAA extended the recruiting dead period to July 31, so no prospects will visit campus before then. When campuses reopen, Ortiz Jr., Dieu and Millner all plan to visit only their chosen schools. However schools handle social distancing protocols, the visits will be just another oddity in a once-in-a-generation recruiting experience full of them for the class of 2021. Assuming they actually happen, of course.

Marauders sign Letters of Intent
Robert Ortiz signs with Dakota State University
Arizona JUCO baseball a proven feeder system
Mingus football opens season at Combs
Former Mingus football coach Ortiz: ‘There is no other place I would have rather been coach’
Event Calendar