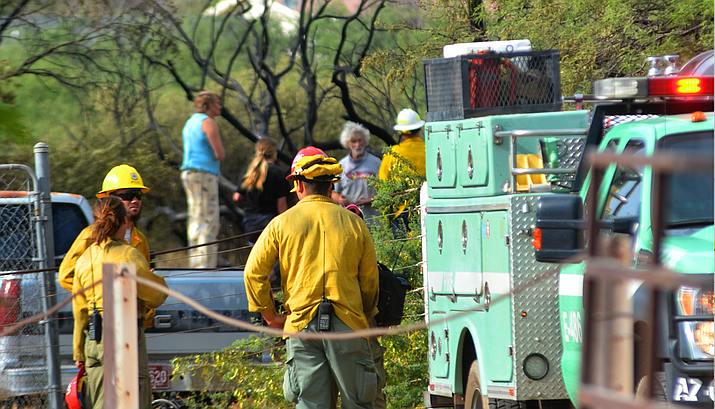 Firefighters responded to a fire in a residential neighborhood in Cornville on Sunday afternoon and had it under control within 30 minutes. Some small buildings and vehicles were destroyed, but no homes were lost. VVN/Vyto Starinskas

CORNVILLE – Verde Valley Fire District firefighters responded to a fire at a residence in Cornville on Sunday, June 28, at about 3 p.m., and were able to keep the fire from creating a large wildfire, according to a report.

A brush fire started next to several homes and out-buildings in the 900 block of Page Springs Road with heavy black smoke visible from around the valley.

Limited access and heavy fuel loads in the area made fire suppression difficult. The fire was wind-driven and moving quickly with spot fires starting 100 to 200 yards downwind. Crews were able to stop forward progress on the fire within 30 minutes and put it out completely by about 5:30 p.m.

Sedona Fire and U.S. Forest Service firefighters were at the scene later in the afternoon.

The fire destroyed the two out-buildings, a travel trailer, and a car and burned some grass and brush in the area.

The cause is listed as “human-caused, unintentional.”

Monday afternoon, the Yavapai County Sheriff’s Office announced that a homeowner had been using a grinder at a residence on East Oak Grove Lane. That person was cited for reckless burning.

Welding, cutting and grinding are prohibited during Stage 2 fire restrictions. Permission can be granted under special circumstances and repair situations, as approved by the fire marshal.

The Verde Valley Fire District would like to remind everyone that both Yavapai and Coconino both have countywide fire bans in effect.