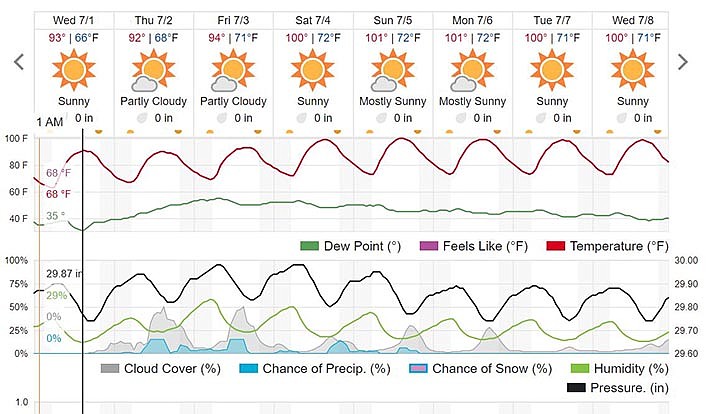 After a cooler start to this week, temperatures will rise again, but likely not in a way to give most of the Verde Valley the start to monsoon rains it desperately needs. Courtesy of Weather Underground

VERDE VALLEY – After a cooler start to the week, temperatures will rise again, but likely not in a way to give most of the Verde Valley the start to monsoon rains it desperately needs.

After nearly a solid week considerably warmer than 100 degrees each day, things cooled down Sunday and Monday. Temperatures will stay in the low 90s most of this week before climbing back above the century mark on Independence Day, Saturday, July 4.

While there is a 20% chance of precipitation for both the Verde Valley Thursday and Friday, there is then zero chance of rain for most of the Valley after that until Friday, July 10, according to the National Weather Service.

Sedona is the lone exception, with a 20% chance of rain on Sunday, July 5.

Tony Merriman, a National Weather Service meteorologist based in Flagstaff, said that at this time of year, most people concerned about weather in the southwest start looking at the Gulf of California.

“That’s where we look to see disturbances and moisture, off the coast of Mexico,” Merriman said. “And right now, there isn’t that much activity down there. What we see here in Northern Arizona will be Thursday at the earliest, and there isn’t much of a chance to see a big rain event.”

Merriman said winds are likely to be moving in the wrong direction to bring a storm to the Verde Valley. He said once the monsoon pattern starts to move into a near-daily cycle, watching the Mogollon Rim will be important, because that’s where Northern Arizona monsoon storms often begin to form.

A condition known as an orthographic lift can take place on the Mogollon Rim.

“Usually, by around 11 a.m., we can look at what’s going on up on the Rim, and see how if storms are developing,” Merriman said. “But there are a lot of variables, and a few small changes could make the difference between no rain vs. several inches.”

Merriman said elevated humidity and lower temperatures are side benefits to low pressure and the windy conditions Northern Arizona has seen the past few days. Gusts as high as 49 mph and an overnight low of 38 degrees were recorded over the weekend at Williams.

“That’s the silver lining of lower temperatures,” he said.

Storms don’t have to develop over the Mogollon Rim, Merriman said.

“Sometimes, storms come right over the Bradshaw Mountains, and roll into the Verde Valley from the southeast,” he said.