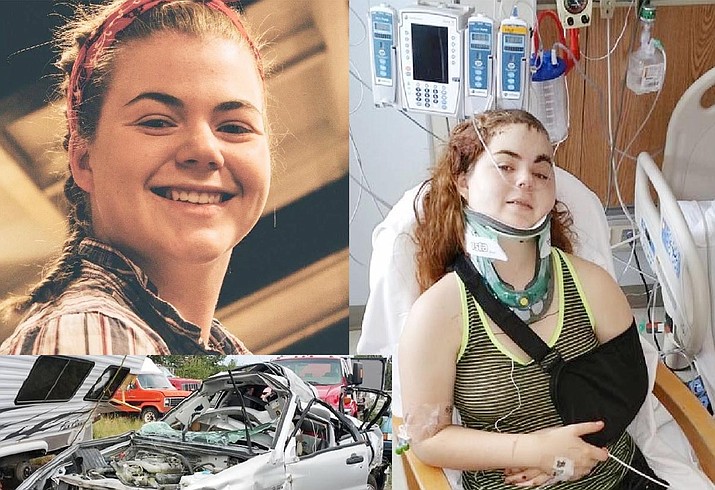 In 2016, a week before beginning her senior year of high school, Tara Kohlan was in an automobile accident. Her car lost traction, she hit a rock wall, over-corrected and went into the median, rolling her car six times. As many professionals stated, it’s a miracle she survived. Courtesy photos

Tara Kohlan is a fighter. Not the fist-swinging, angry type. She’s the optimistic fighter that doesn’t quit. Won’t stay down no matter what life hits her with. And (mostly) keeps an optimistic disposition along the journey, “Don’t take life for granted; make every day count.”

In 2016, a week before beginning her final year of high school, Tara was heading to Flagstaff to connect with her older sister, Josie.

Her car lost traction, she hit a rock wall, over-corrected and went into the median, rolling her car six times. As many professionals stated, it’s a miracle she survived.

Born and raised in Sedona, Tara had a good life. Dad worked as a pharmaceutical and surgical sales rep. Mom, Kim, is a fitness instructor and personal trainer.

The girls could roam the Village with friends, enjoy the red rocks and had freedoms unknown to kids raised in large cities.

She played sports in school: soccer, basketball, volleyball, softball, cheerleading. She also focused on academics and her social life.

However, they felt compelled to go back. She had some EMT training, he in mixed martial arts. No one on scene was helping Tara, whose body was trapped in the wreckage.

He had to break the car’s seat to free Tara, she used her training to stabilize Tara until professionals arrived. They may well have saved her life.

She attended YL winter camp, meeting a girl from Cottonwood who would become her best friend. Tara and her mom had decided it would be good for her to try Orme private school near Mayer for the rest of high school. Then, the accident.

The doctors determined Tara had a broken collar bone and neck, had fractured her skull, and needed emergency cranial surgery to stop the bleeding in her brain.

After some time in the hospital and six months of recovery at home (and attempting online classes), Tara ventured back to Orme for the second semester. During this time, she fought through a painful six months of physical therapy (due to ongoing pain and scar tissue buildup, she still does PT).

Her mom was there every step of the way as her caregiver, cheerleader, mommy and, when needed, drill instructor.

For her final year Tara transferred to Mingus Union High School in Cottonwood, graduating in 2018.

She said, “Since my sister went to Red Rock High School this was a place where I could have a fresh start and my own identity.” From there she took a gap year to work and contemplate her future.

She currently works at Tuesday Morning, takes classes at Coconino Community College working toward a Medical Assistant Certificate, will eventually transfer those credits to NAU, with plans for a career in the medical field.

None of this is easy since she deals daily with the effects of Traumatic Brain Injury.

But … Tara Kohlan is a fighter.