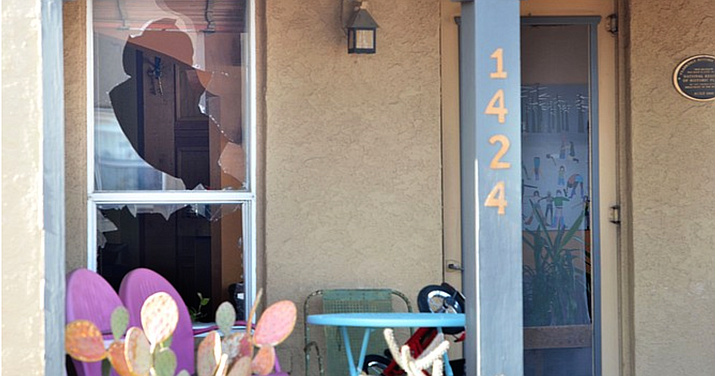 Broken windows were a prominent feature of a Clarkdale home of Second South Street on Thursday, Feb. 27, after a domestic disturbance call led to a man dying in an officer-involved shooting and a 4-year-old child transported by helicopter to a hospital. A 6 p.m., Thursday, March 5 public forum has been set up to discuss the incident. VVN/Vyto Starinskas

CLARKDALE — In response to media inquires about a Thursday, Feb. 27 officer-involved shooting, in which a man was killed, the Clarkdale Police Department announced Sunday that a community forum will take place.

As of Sunday evening, police have not released the name of a man killed during the Feb. 27 incident, nor the condition of a child taken by helicopter to a hospital after having been found injured prior to officers’ arrival.

In an email to the Verde Independent, Clarkdale Police Sgt. Nicole Florisi spoke about why the child’s condition could not be stated.

“We have not yet received an official confirmation of the child’s condition, and therefore would be remiss in releasing any pertinent information without that,” Florisi said.

Thursday, Feb. 27, according to a news release from the Town of Clarkdale, one man was pronounced dead on-scene after a confrontation involving a Clarkdale police officer.

At about 3 p.m, officers responded to a dispatch regarding reports of a domestic disturbance inside a home at 1424 Second South Street. During a confrontation with a man at the house, an officer shot and killed the suspect.

The officer was not injured.

The 4-year-old child was flown to Flagstaff Medical Center for treatment.

According to the news release, Clarkdale Police Chief Randy Taylor has asked the Department of Public Safety’s Officer-Involved Shooting Team to handle the investigation.

Multiple agencies assisted at the scene, including the Jerome and Cottonwood police departments, Yavapai County Sheriff’s Office and the Arizona Department of Public Safety.

Clarkdale Police said the officer’s name was not be released for at least the first 48 hours after the incident. The deceased suspect’s identity was being withheld pending next-of-kin notification.

Clarkdale Police said further details on the shooting investigation will only come from Arizona Department of Public Safety Public Affairs Unit. Florisi said it cannot release the officer’s name, as DPS has not yet finished the interview process with those involved.

“Once that process is completed we will have additional information for you regarding the officer’s information, as well as the call itself,” Florisi wrote.

An entire block of central Clarkdale was cordoned off by investigators.

Exact questions to be answered at this Thursday’s forum were not specified in a flier for the event.

“The forum will provide a platform for information sharing, education on trauma and resiliency, and available resources within the community,” the flier states.

Florisi said it’s important for police to ensure all information released is accurate and that its release does not compromise any further investigation.

“Your patience is appreciated during this chaotic and challenging time for the community and the department,” Florisi wrote.