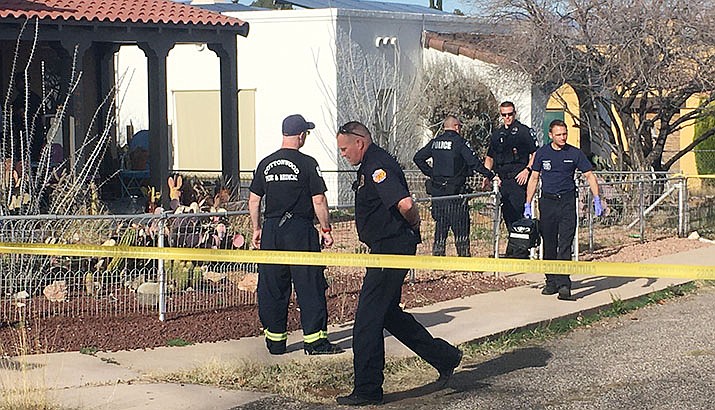 A domestic disturbance call at a Clarkdale home of Second South Street on Thursday, Feb. 27, led to a confrontation that left a 33-year-old man shot dead by a Clarkdale police officer, according to police. The man struck his 4-year-old son and caused injuries that led to the boy’s death, police say. A 6 p.m., Thursday, March 5 public forum has been set up to discuss the incident. VVN/Vyto Starinskas

CLARKDALE — According to a news release sent out Monday, the 4-year-old boy injured in a Feb. 27 domestic disturbance at 1424 Second South Street in Clarkdale was pronounced dead on Saturday from severe head injuries.

Clarkdale Police say the man who caused the fatal injuries was the boy’s father, who was killed by a Clarkdale officer during a confrontation at the scene. That father is Joshua David Hernandez Lord, 33.

Medical personnel were dispatched to the scene, which was first reported to dispatchers as an injured person. No information was received that the injuries were the result of assaults; the 911 calls did not convey the severity of the incident nor the extent of the injuries, police said.

Per Clarkdale Police protocol, Officer Carlos Godina responded to assist medical personnel. He attempted several times to deescalate Lord at the scene, but Godina’s Taser was ineffective, with Lord’s behavior continuing to escalate.

The report says events rapidly unfolded, and within minutes, Godina discovered the injured boy. The officer continued his attempts to deescalate the situation, all while keeping the suspect in the residence and protecting the injured boy.

During the encounter, the suspect carried the guitar he allegedly used to assault his son and mother. Inside the house, he grabbed a knife and used it to continually threaten Godina. He then “aggressed” the officer, the report states, “forcing Officer Godina to use lethal force.”

Officer Michael Brundridge then arrived and provided medical attention on the 4-year-old child until EMS arrived; Lord, the father, was pronounced dead at the scene. The woman was also transported for medical treatment.

Reports do not say who lived at the residence.

Police said additional information will be posted on the Town of Clarkdale website, clarkdale.az.gov, when it becomes available.